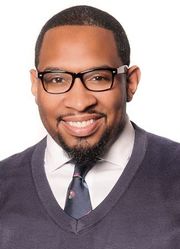 McClure is the son of Pastor Michael McClure Sr and Angela Woods McClure of Revelation Church Ministries in Irondale. His brother, Darius, is Senior Pastor of Christ Church in Fairfield, and his sister, Angelique, is a graduate of Stillman College.

McClure graduated from Minor High School and attended University of West Alabama to play college football, but dropped out after three years after to pursue ministry. He was appointed as a "movement pastor" for Revelation Church. More recently, McClure completed a diploma of Theology from Ashland Theological Seminary in Cleveland, Ohio in 2012. He is currently pursuing a Master of Divinity at Ashland.

McClure founded The Rock Church in 2009 at Miles College in a college ministry known as Royal Nation Movement, then moved the congregation to L. R. Hall Auditorium in downtown Birmingham. In 2010, the church purchased the former West Birmingham Christian School's 12-acre campus in Forestdale. Since 2012, the church has also operated separate campuses in the historic Carver Theatre and at Center Point High School.

McClure is featured on a daily weekday broadcast on My68. The church, associated with the Cleveland, Ohio-based Shepherds Connection, has grown to nearly 10,000 members and is one of the area's fastest growing churches.

In 2011, McClure was listed in Who's Who in Black Alabama. In the same year, McClure held Easter services for 7,000 people at Boutwell Auditorium. Over 10,000 pounds of food and $9,000 worth of gasoline was distributed to the community during the weekend, which was capped by an adult Easter egg hunt.

In 2013, McClure erected a series of controversial billboards labeled "Strip For Me" near the Palace Gentleman's Club. The billboards reference Hebrews 12:1 "Therefore since we are surrounded by such a great cloud of witnesses, strip off every weight and sin..."

In December 2018 McClure presided at the funeral of police shooting victim E. J. Bradford Jr. He joined with Hunter Street Baptist Church pastor Buddy Gray to form "Pastors4People" which facilitated understanding across racial divides in the aftermath of the shooting.

In January 2019 McClure released his fist single as a vocalist, a praise song entitled "BIG", and the first single from his debut album, Live Free. The single reached #7 on Billboard magazine's gospel digital sales chart and spent 10 weeks atop the magazine's gospel airplay chart. The album reached #1 on the Billboard gospel album chart. McClure was crowned "Best New Artist," and the album named "Rap/Hip Hop/Gospel Album of the Year" at the 2020 Stellar Gospel Music Awards. McClure used a portion of his proceeds to purchase outstanding medical debt through the Rye, New York-based charity RIP Medical Debt. A follow-up single, "I Got It" reached #1 on Billboard's gospel chart in March 2021.

McClure and his wife JaQuetta were married in 2006. The couple have five children.