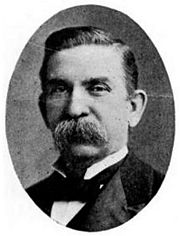 Thompson was the son of Joseph and Eliza Cary Thompson of Tennessee. He was taught at home by his mother, a graduate of LaGrange College, until the age of 12. He then attended the Shelbyville College and his uncle's institution at College Grove, Tennessee. In 1862 he enlisted with the Rock City Guards at Corinth and was assigned to the 1st Tennessee Infantry. He was discharge for being underage, but re-entered the service as adjutant to cavalry inspecter Leger Grenfed under General Joe Wheeler. He resigned that position to become part of General Nathan Forrest's escort guard, remaining in that until until the end of the war. He was wounded at Selma and was part of the force the surrendered to General Canby at Gainesville, Sumter County.

In 1865 Thompson was hired as deputy clerk for Bedford County, Tennessee and began to study law under Henry Cooper, who later represented Tennessee in the U. S. Senate. He married Julia Queen of Shelbyville on November 28, 1866.

Rather than pursue the practice of law, Thompson became engaged as editor of the Riverside Weekly in Louisville, Kentucky and became an active member of the temperance movement, aligning himself as a Good Templar and serving that state organization as lecturer and grand secretary.

In 1875 Thompson became the Southern agent for the Standard Oil Company, based in Wilmington, North Carolina. He moved to a similar position with the United Gas and Improvement Company in 1881 and relocated to Savannah, Georgia.

In 1884 he moved to Birmingham and amassed a valuable real estate portfolio, but lost most of his wealth in Panic of 1893. He also worked as the Birmingham manager for the Commercial Alliance Life Insurance Company of New York. He was one of the organizers of the Birmingham Commercial Club and was its secretary, actively promoting the development of the city to the nation's press.

Thompson resigned in 1895 to become industrial agent for the City of Johnstown, Pennsylvania. He was successful and was made general manager of the 1896 Pennsylvania State Fair. While working there he continued to invest in Southern enterprises, notably in the development of Huntsville. In 1899 he sued Goerge Swank, publisher of Johnstown's Daily Tribune for libel and moved to Huntsville, which he served as President of the Chamber of Commerce.

Thompson returned to Birmingham as the Southern organizer for the Citizen's Industrial Association of America, an anti-union organization. He served as secretary of the Citizen's Alliance of Birmingham and edited their Citizens' Alliance Bulletin. His testimony before the United States Industrial Commission in 1900 regarding the danger of trade unions repeated the prediction of W. H. Baldwin that employers pitted against union power would hire African Americans to skilled positions, bringing about massive social upheaval.

In 1906 Thompson, as President of the Alabama State Land Congress, secretly represented the interests of the railroads operating in the state and actively campaigned against the candidacy of B. B. Comer, a member of the Alabama Railroad Commission for Governor of Alabama. His bid for public funds to develop a hydroelectric dam at Muscle Shoals was vetoed by President Theodore Roosevelt.

Thompson, whose father-in-law was a prominent Catholic of Bardstown, Kentucky converted to Catholicism after his marriage, renouncing his membership in several fraternal organizations that did not admit Catholics. The Thompsons had six children, one of whom, Paul, joined the St Bernard Abbey in Cullman and became a priest.

Thompson died in Baltimore, Maryland in 1923 and is buried at Saint Joseph's Cemetery in Bardstown, Kentucky.