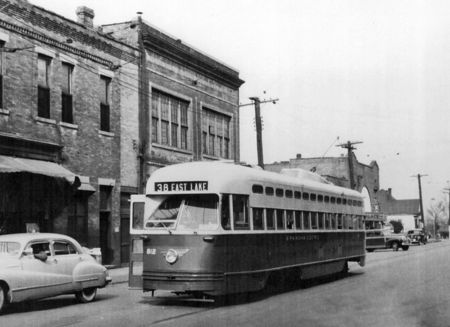 The Tidewater line was purchased out of receivership by the Birmingham Railway, Light & Power Company in 1917 and the lines absorbed in 1924. That year saw numerous route modifications, especially east of downtown where the new No. 38 route took the place of the former Tidewater route. In Ensley the No. 27 route followed the same route as the No. 6 Pratt-Ensley streetcar line. The two former Tidewater lines were reunited on June 27, 1927.

Service on the No. 27 Ensley No. 38 South East Lake line was the last of Birmingham's once-impressive streetcar system. The last car rolled down the track on April 19, 1953.

After 1924 the route of the original Birmingham-Tidewater Railway was changed to reflect its absorption into the BRyL&PCo system. Instead of returning to the old Tidewater Barn in Ensley, cars looped over to 20th Street on Avenue D then returned to 17th Street on Avenue I. From there the route was the same as before as far as downtown. The new route turned south at 19th Street, east on 2nd Avenue North, south again on 23rd Street, and proceeded out of town on the Weatherly Viaduct.

After reaching 68th Street in East Lake, the streetcar resumed its established route past Howard College to 8th Street. On its return, however, the No. 27 turned back down to 2nd Avenue South on 82nd Street and retraced its way to 1st Avenue North via 68th Street.