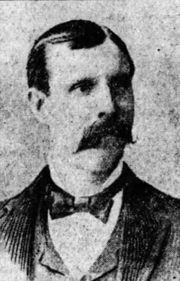 Peter Zinszer (born November 3, 1857 in Kentucky; died October 29, 1895 in Birmingham) was a merchant, and the founder of Peter Zinszer's Mammoth Furniture House, which began trading on March 15, 1884 and moved into a new 4-story building in 1889.

Zinszer and his wife, Rosa moved from Louisville, Kentucky to Birmingham with their young son Joseph in 1884. He opened his furniture store in a "little frame building" downtown, and soon built his business into a great success, largely through the extension of credit to customers. He constructed a new three-story storehouse at 2115-2117 2nd Avenue North in 1889.

Zinszer fell ill in 1894 and was confined to bed in August 1895. He succumbed to his illness shortly before his 38th birthday in October 1895. He was buried at Oak Hill Cemetery, with his casket moved to a newly-built mausoleum in 1896 . Rosa and Joseph continued to operate the store successfully.