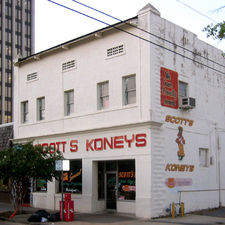 In addition to hot dogs, Scott's serves a full breakfast menu, a variety of sandwiches, and frequent lunch specials. It was first opened by Scott Green in 1977 across 20th street, then moved in 1995 to 109 20th Street South on Block 121 next door to a Kinko's location and downstairs from the former location of Reed Books, when Adamson Ford opened. Though there were a few 4-seat tables in the front window, most of the seating was on stools at large bar height tables in the center of the dining room.

In May 2006, Corporate Realty Development announced that it was considering building a mixed-use high-rise project on the block occupied by Scott's. The City of Birmingham agreed to purchase the property and lease it to Corporate Realty at $10/month. After the announcement, Green expressed hope that the city would help his business to relocate. At the time, Green was interested in a number of nearby storefronts, including space at the Taylor Building at 20th Street and Morris Avenue.

The restaurant closed its 20th Street location on August 30, 2007 and reopened in September at the corner of 21st Street and 3rd Avenue South in the lower level food court in the BPA Deck 8. The bar-height tables and bar stools from Block 121 were brought over, and there is ample seating. In 2011, Green opened an ice cream window adjacent to the main restaurant.