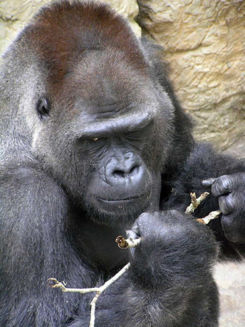 Babec (born December 22, 1979 in Chicago, Illinois; died April 11, 2008 at the Birmingham Zoo) was a male silverback Western Lowland Gorilla (Gorilla gorilla gorilla), the youngest of three sons born to Otto and Benga at Chicago's Lincoln Park Zoo. Between 1988 and 1992 he sired 8 offspring, 5 of them with Madge of the Cincinnati Zoo. Six of his offspring survived into maturity, and he has one grandchild, Kiazi Kitamu at the Pittsburgh Zoo. Babec was on exhibit at the Birmingham Zoo from 1993 to shortly before his death at the age of 28.

In 2003 Babec, then weighing 400 pounds, was diagnosed with advanced heart disease after he exhibited symptoms including coughing, lethargy and loss of appetite and indications of chest pains. As part of his therapeutic diet, zoo veterinarian E. Marie Rush prescribed antacids, antibiotics, diuretics and two 30-oz servings of grape-flavor Powerade per day, which was donated by the Birmingham Coca-Cola Bottling Company. After several months the drug treatment showed little sign of effectiveness, and Babec's weight dropped to 320 poinds. Veterinarians diagnosed him with end-stage heart failure due to fibrosing cardiomyopathy.

On September 25, 2004 Babec became the first gorilla to undergo the successful implant of a cardiac resynchronization therapy device (a type of advanced pacemaker). The device was suggested and donated by its manufacturer, the Guidant Corporation. It was implanted during a 6-hour operation performed at the zoo's veterinary hospital and led by UAB cardiologist Neal Kay. He came through the operation well and special care was taken to modify his environment to minimize opportunities to jeopardize the procedure through strenuous arm activity. His fingernails were closely clipped and various distractions applied, such as fingernail color, shaved patches of hair and chewing gum in his fur, to distract him from manipulating his sutures.

In the spring of 2005 the wires connecting the CRT device to Babec's heart were loosened in a minor tussle with the zoo's younger gorilla, Jamie. The damage was evident because of the return of Babec's symptoms. The damage was corrected surgically and zoo staff made the decision to alternate Babec's and Jamie's exhibit times.

On April 29, 2007 the CRT device was again replaced in a 7-hour procedure. Almost a year later he showed signs of chest pains again, along with lethargy and a loss of appetite. He was pulled off exhibit in late March for closer monitoring. He was euthanized on April 11 after he took a turn for the worse. Babec's father died of heart disease in his mid 20s. One of his brothers at the Cleveland Zoo has also been diagnosed with the ailment. Data from Babec's pacemaker has contributed greatly to the National Gorilla Cardiac Database, which was created in November 2006.