This article is about the former hospital on Montclair Road. For the current location, see Grandview Medical Center. 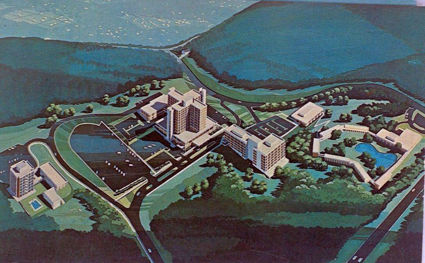 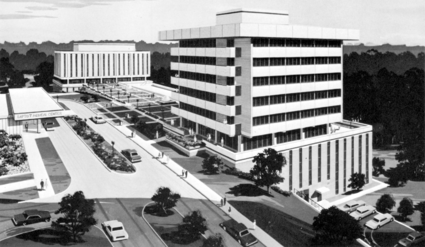 Architect's rendering of the John H. Buchanan Building from a 1968 advertisement 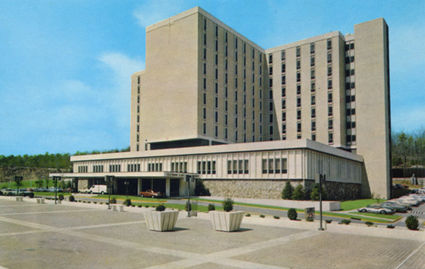 Trinity Medical Center (originally Baptist Medical Center Montclair) was an affiliate of Community Health Systems of Brentwood, Tennessee. It was located on a 120 acre campus at 800 Montclair Road near the intersection of 52nd Street South in Crestline.

The Birmingham Baptist Hospital was founded in West End in 1922. The Montclair Road campus was constructed in 1966 to serve eastern Birmingham and to replace the Highland Avenue Baptist Hospital. The hospital was constructed for 485 patient beds. The John H. Buchanan Building, constructed in 1968, housed that Ida V. Moffett School of Nursing, a program which was transferred to Samford University in 1973. It is connected to a professional office building by an open plaza on the roof of a nine-level parking deck.

The hospital expanded to include three professional buildings, three parking decks, a cancer treatment center and a women's center, for a total of about 1 million square feet of space for 447 beds in service.

In October 2005, Baptist Health System sold a 65% stake in the hospital to Triad Hospitals of Plano, Texas which became a managing partner. The name was changed to Trinity Medical Center in 2006. Triad was sold in July 2007 to Community Health Systems. BHS sold its remaining stake of Trinity in June 2008 for an undisclosed amount.

In 2007 Trinity announced that they were planning to relocate to a more accessible site. Their original plan was to construct a new $315.8 million facility on the site once slated for the Falls at Grants Mill shopping center off I-459 at Grants Mill Road near Irondale. Other sites in Leeds and at Liberty Park were also under consideration. The City of Birmingham requested to work with the hospital to find a site within the city limits, but was initially unsuccessful. The City of Irondale purchased the 154 acres from the state for $6.7 million in May 2007 to lease back to Trinity for the hospital's campus. The city's attorney said Trinity is bound by contract to pay that back in the form of lease-purchase payments. Trinity won state approval to build at the Grants Mill site in May 2008.

On September 30 2008, Trinity filed a letter of intent with the state health board to relocate to the former HealthSouth digital hospital on U. S. Highway 280 instead of building at the Grants Mill site, which had been chosen by the hospital's previous owners. The City of Birmingham offered $55 million in incentives. Community Health Systems plans to invest $205 million to buy and finish the hospital, and another $70 million to equip the new hospital. Community Health also announced plans to build a $90 million medical office building at the adjacent Cahaba Center at Grandview development. Brookwood Medical Center and St Vincent's Health System, along with Select Specialty Hopsitals, have opposed Trinity's move to Highway 280. Hearings before an administrative law judge began in late September 2009, leading to an advisory opinion that went before the State Certificate of Need Review Board. After clearing all the legal hurdles, construction on the Grandview Medical Center began in 2013 and opened in October 2015.