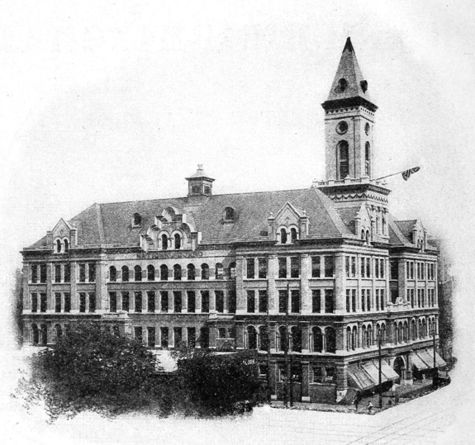 In addition to municipal offices, the building housed the Birmingham Fire Department, a National Guard unit, the first Birmingham Public Library and several retail spaces. It also housed a gymnasium that was opened for public recreation. Contractor for the $200,000 project was Henry Stockmar, who returned to the building as a member of the Birmingham Board of Aldermen as soon as it opened.

The building was damaged by a fire in 1925, which destroyed the library and caused irreparable damage to the central tower. Space in the Martin Office Building was provided for the city while repairs were made. The library relocated to a new building at Woodrow Wilson Park in 1927.

Another fire which broke out shortly after midnight on June 23, 1944, caused heavy damage to the fourth floor, housing the offices of the city comptroller and city engineer. Twenty companies responded to the blaze, which sent flames high into the air. Commissioner of Public Safety Bull Connor stated that the police radio, the antenna for which was on the roof of the building, was restored to service within an hour of the fire being successfully brought under control.

The 1901 building, without its tower and attic levels, continued to house city offices until 1950 when a new Birmingham City Hall was completed across from the Jefferson County Courthouse at Wilson Park. Its cornerstone was removed and stacked with previous ones adjacent to the south entrance of the new building. The vacant building was demolished in January 1952.

Tenants in the City Hall building in the 1930s included a drug store, shoe repair, jewelry, barber shop, United Woolen Mills, an optician, a café, the Austin Music Company, the Jefferson County Board of Health, Birmingham Industrial Water, an electric store, and the Birmingham Traffic Department.