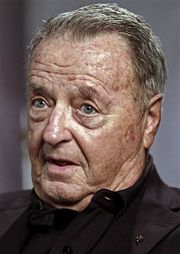 Robert Cleckler "Bobby" Bowden (born November 8, 1929 in Birmingham; died August 8, 2021 in Tallahassee, Flordia) was the head football coach for the Florida State University Seminoles from 1976 to 2010. He led FSU to two BCS National Championships in 1993 and 1999, and to twelve Atlantic Coast Conference championships since joining the league in 1991.

With 388 career wins, Bowden is ranked behind Joe Paterno as the NCAA's second all-time winningest Division I coach. His 20-10-1 record in bowl games also ranks second all-time behind Paterno.

Bowden was the second child born to Sunset Cleckler and Bob Pierce Bowden, a banker at First National Bank of Birmingham. Their house was just beyond the east end zone of the Woodlawn High School football field. Young Bobby took to sports right away, playing fullback for his YMCA team at the age of 9 and watching Woodlawn practice from the roof of his house with his father. During the Great Depression, Bobby's father was able to keep his job, but his grandfather, a builder, went broke and moved into Bobby's room with him.

In 1934 the Bowdens moved to East Lake, about half a block from Howard College's Berry Field. His father bought him a Howard uniform and helmet, which he wore to play catch. They also went to high school games at Legion Field together.

One day in 1943, Bobby came home with knee pain and swelling. He was diagnosed with rheumatic fever and spend the next six months at the hospital, and another six confined to bed at home. He listened to constant reports from the warfront as well as Alabama football games on Saturdays. Bobby kept a scrapbook of his football idols, including Vaughn Mancha and Woodlawn graduate Harry Gilmer.

He and his family, members of Ruhama Baptist Church, prayed for his recovery, and he did regain enough strength to enroll at Woodlawn High in 1945. His doctor cautioned against playing sports, however, so Bobby joined the marching band as a trombonist. He practiced enough to earn first chair in the school orchestra. He also played with the Lee Jordan Band, which played parties and Saturday night dances at the Rose Club.

Frustrated by being unable to play sports, Bobby convinced his family to seek a second opinion. The new doctor told him his heart was strong enough, so Bowden immediately tried out for the high school team as a sophomore in 1946. He broke his thumb during practice and Coach Kenny Morgan asked the family to sit him out for a semester to preserve his remaining eligibility. He came back to the team in 1947 and became a star halfback in the offensive backfield as well as in the defensive secondary. He was also a team leader, leading by example by working hard and keeping a positive attitude.

Bowden went on to the University of Alabama as a quarterback, pursuing a lifelong dream to play for the Crimson Tide. He spent his first semester quarterbacking the freshman team, rushing back to Birmingham each weekend to visit his family and spend time with Ann Estock, a girl he had begun dating as a junior. The couple eloped on April 1, 1949, taking his father's new 1949 Ford to Rising Fawn, Georgia to exchange vows. They tried to keep it a secret, but word soon spread. Bowden transferred from Alabama, which had a rule against married players, back home to Howard College. He played halfback for Earl Gartman's 1949 Bulldogs. The team went 4-5 in 1949, 2-8 in 1950 and 2-3-1 in 1951. Bowden was moved to quarterback for his senior season, and was named a "Little All-American" for guiding the small school to a 5-4 season (including a 20-6 loss at Florida State's new Doak Campbell Stadium).

In college, Bowden majored in physical education while Ann went to work in a real estate office started by his father before enrolling at Howard herself. The couple's first children, Robyn and Steve, were born in July 1951 and September 1952, respectively. The children stayed at home with Bobby's parents while Bobby and Ann went to classes and participated in extracurricular activites. Bobby graduated in January 1953 and commuted to George Peabody College in Nashville to earn a masters in education, making him eligible to join the Howard faculty as an assistant coach at $3,600 a year. In July 1954 their third child, Tommy, was born and Bowden moved on to the head coaching job at South Georgia College in Douglas.

Bowden served as an assistant football coach and head track and field coach at Howard from 1954-1955. He left his alma mater to serve as Athletic Director and head football, baseball and basketball coach at South Georgia College from 1956 to 1958. Bowden then returned to Howard as head coach, where he compiled a 31-6 record between 1959 and 1962. In 1962, Bowden went to Florida State University as an assistant coach under Bill Peterson and left in 1965 to go to West Virginia University as assistant coach. When the head coach at West Virginia left before the 1970 season, Bowden replaced him. Bowden then compiled a 42-26 record at West Virginia University before returning to FSU as head coach in 1976.

At Florida State, Bowden inherited a team that had won just four games over the previous three seasons. In his 31 years as the head coach at Florida State, he has had only one losing season, his first in 1976; and has compliled a 296-82-4 record. He is the only coach in Division I-A football history to have enjoyed 14 straight seasons of 10 or more wins. His Florida State Seminoles finished an unprecedented 14 straight seasons in the top 5 of the Associated Press College Football Poll, and won the College Football National Championship in 1993 and 1999.

Bowden, who had kept private his 2007 diagnosis with prostate cancer, announced his retirement from Florida State on December 1, 2009. He coached the Seminoles' to a bowl victory over his former West Virginia Mountaineers before leaving the program to "head coach in waiting" Jimbo Fisher. He retired to Panama City, Florida and later returned to Tallahassee's Killearn Estates. Bowden was hospitalized with COVID-19 in October 2020. He was diagnosed with pancreatic cancer in July 2021, and died at home on the morning of August 8.

Bobby is not the only member of his family to coach Division I-A football. His son Tommy Bowden is the head coach at Clemson University; another son, Terry Bowden, was the head coach at Auburn University where he was the 1993 Coach of the Year; and a third son, Jeff Bowden, was the offensive coordinator at Florida State. All three Bowden men who were head coaches have achieved an undefeated season: Terry in 1993 at Auburn; Tommy in 1998 at Tulane; and Bobby in 1999 at Florida State. Bobby's 1999 Florida State team was the only one to win a National Championship, however. As both Florida State and Clemson are in the same division of the Atlantic Coast Conference for football, the two teams play every year in a game that has become known as "The Bowden Bowl". Their first meeting, in 1999, was the first time in Division I-A history that a father and a son met as opposing head coaches in a football game. As of September 3, 2007, Bobby holds the edge in the series, leading 5-4 with all four losses within the last five seasons.

One Bowden Bowl was scheduled between Auburn and Florida State for 1999 when Terry Bowden was the coach at Auburn. However, Terry's midseason resignation in 1998 ended the possibility of a Bowden Bowl. Auburn later used the buyout clause in the contract to get out of this matchup.

In 2004, The Fellowship of Christian Athletes presented the first of what is now a yearly award in Bowden's name, "The National Bobby Bowden Award", honoring one college football player for his achievements on the field, in the classroom and in the community. The award is presented each year prior at the Bowl Championship Series' national title game.

In November 2004, by an act of the 2000 session of the Legislature of the State of Florida, Florida State renamed the field at Doak Campbell Stadium as "Bobby Bowden Field at Doak Campbell Stadium", erected a bronze statue of his likeness, and unveiled a three story stained-glass window in his honor. Bobby Bowden Field was officially dedicated on November 20, 2004 before the annual game with archrival Florida. The Seminoles lost the game 20-13.

The Bobby Bowden Collegiate Coach of the Year Award was established in 2010 by the Over the Mountain Touchdown Club. Bowden was named the 2010 Golden Flake Legend of Birmingham as part of the ceremonies for the BBVA Compass Bowl.

A Bobby Bowden statue was erected outside Samford's Seibert Stadium in 2013.

Bowden has co-authored several books, including: