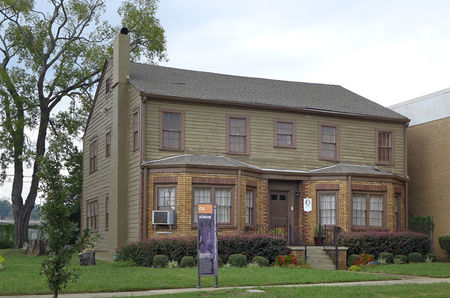 The Edward Ballard residence in 2017

Ballard moved to California in the early 1950s and sold the house to Jesse "Ma" Perkins. Ma Perkins, owner of the Zanzibar Hotel, rented rooms to doctors and civic groups, and, in the late 1950s, operated a bed and breakfast there. The kitchen frequently was used to feed the Birmingham Black Barons at team gatherings.

The house was later purchased by Doctor Herschell Hamilton Sr, who hosted meetings of participants in the Civil Rights Movement and treated victims of violence that occurred after Bull Connor ordered the use of police dogs and fire hoses to disperse demonstrators.

It is now owned by Hamilton's son, developer Herschell Jr, who, along with his wife, Majella, began working in 2009 to restore the house as a cultural center with meeting rooms and gardens. Their program series is known as the Ballard House Project.

The house was included as part of a Multiple Property Listing for structures related to the Civil Rights Movement in Birmingham, Alabama, 1933-1979 on the National Register of Historic Places in 2004. In 2017 the Birmingham City Council approved a $50,000 grant to the Ballard House to gather and distribute oral histories relating to the city's role in the Civil Rights Movement.