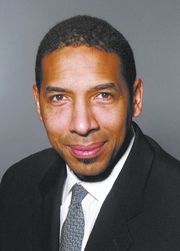 Hamilton is the son of Herschell Hamilton Sr, personal physician to Fred Shuttlesworth in the 1950s and 60s and a financial supporter of the Civil Rights Movement. He graduated from Parker High School and went on to earn a bachelor of science in zoology at Howard University in Washington D.C. in 1984 and a master's in public and private management from Birmingham-Southern College in 1996.

Hamilton was a member of the Birmingham-Jefferson Civic Center board of directors in the 1980s. In 1991 he began working as an account executive for Raymond James Financial, then left in 1993 to work as an assistant to the Alabama Director of Finance. In 1995 he returned to private finance as a vice-president at Porter White & Company.

From 1997 to 1999 Hamilton served as chief administrative assistant to mayor Richard Arrington Jr. In 1999 he took on the role of chief operating officer for CliqueNetStudio in Vienna, Virginia. In 2000 he returned to Birmingham and worked as vice president of new market ventures for Masada Resource Group, a company founded by Arrington's former city attorney, Donald Watkins. He established Formation Methods in 2003, which evolved into BLOC Global.

Hamilton serves on the executive committees of the Birmingham Business Alliance and Leadership Birmingham. He has also served on the Birmingham Water Works Board and the boards of the Birmingham Civil Rights Institute, Brookwood Medical Center and the Housing Fund, Inc.. He and his wife, Majella founded the Ballard House Project in 2013 to convert his father's former medical office into a cultural center.