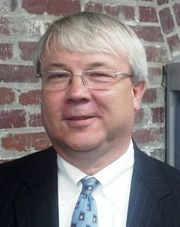 Jack D. Williams (born September 7, 1957 in Breman) is the representative for District 47 in the Alabama House of Representatives.

Williams earned his bachelor's degree at Southeastern Bible College in 1983.

Williams was first elected to the Alabama House when he beat Tom Buck in the 2006 Republican primary and went unopposed in the general election. While serving in the legislature, he chaired the Alabama House Commerce and Small Business Committee. In 2010 he and Democratic colleague Merika Coleman co-sponsored the Williams-Coleman Human Trafficking Act, giving state and local law enforcement agencies more scope to investigate and prosecute human trafficking crimes.

In 2015 Williams filed a bill that would have re-structured the University of Alabama Board of Trustees to increase representation for the system's Huntsville and Birmingham campuses. That legislation did not make it out of committee. He also co-sponsored a bill drafted by the Alabama Law Institute which would have allowed public officials to solicit unlimited donations from lobbyists and others for legal defense funds.

Williams announced in February 2017 that he would not run for a fourth term, and instead made plans to campaign for David Carrington's former District 5 seat on the Jefferson County Commission. In April 2018 Williams and former Alabama Republican Party chair Marty Connors were arrested by federal agents and charged with conspiracy and fraud relating to California-based Trina Healthcare's efforts to influence Alabama law.

Outside of politics, Williams has served as board chair for Greater Birmingham Habitat for Humanity and worked as director of development for Aldridge Gardens in Hoover from 2011 to 2013. From 2004 to 2015 he published BlazerSportsReport.com, an online affiliate of Rivals.com which covers UAB Blazers athletics. He and his wife, Glenda have two children: Regan and Jordan. He attends the Fullness Christian Fellowship.