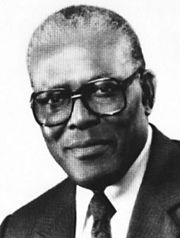 Louis J. Willie Jr (born August 22, 1923 in Fort Worth, Texas; died September 16, 2007 in Birmingham) was a successful business executive who helped break the color barrier in business and sports circles.

Willie grew up in the Dallas area, graduating from Wiley College in Marshall, Texas with an economics degree. He earned his MBA from the University of Michigan. He came to Birmingham for an interview with A. G. Gaston in 1952. He was hired as a comptroller for Booker T. Washington Insurance and rose to become Gaston's top assistant within 10 years.

Willie helped Gaston grow his business empire that included Citizens Federal Savings Bank and the WENN-FM and WAGG-AM radio stations. Willie became president of Booker T. Washington Insurance in 1986 and held that position until his retirement in 1994.

He was also a founding member of the A. G. Gaston Boys and Girls Club. He served on the boards of Alabama Power, AmSouth Bank, the Birmingham Museum of Art, St Vincent's Hospital, Operation New Birmingham, and the Birmingham Regional Chamber of Commerce.

Willie was the first African American to be admitted to several formerly-segregated social clubs. He was a member of the Downtown Club and The Club on Red Mountain. In July 1990, Willie became first black member of the Shoal Creek Country Club, defusing a racial controversy that nearly led the Professional Golf Association to cancel its tournament there. He was inducted into the Alabama Academy of Honor in 1996 and the Birmingham Business Hall of Fame in 2000.

Willie served on the vestry of the Cathedral Church of the Advent. He was survived by his wife, Yvonne, four siblings, his son, Louis III, and grandson, Louis IV. He was cremated and his remains interred in the columbarium at the Advent Rector's Garden.