From Bhamwiki
(Redirected from Pizitz Building)
Jump to: navigation, search 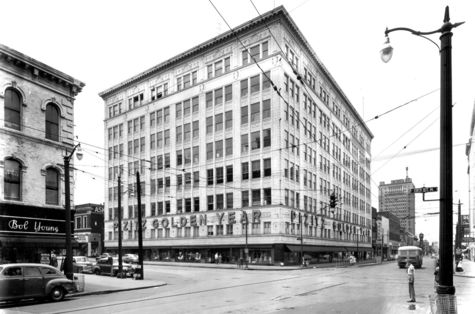 The Pizitz Building is the former flagship department store for Pizitz, located at 1821 2nd Avenue North. The eight-story 225,000 square-foot building was completed in 1923. It has an attached parking deck, which was added in 1965.

Ernest van Vleck, F. Gaertner and E. Ashley Jr of the New York architecture firm of Starrett & van Vleck consulted in the design of the building, which was executed under the supervision of local architect Harry B. Wheelock. Construction was planned to begin on January 1, 1922 and to be completed in one year's time. The store's departments were arranged with cosmetics, hosiery, women's sportswear, hats, jewelry, men's wear and the Pizitz Bake Shop on the ground floor, with "better" men's wear, a hair salon and a restaurant on the mezzanine level. Below that was the store's "Bargain Basement".

Infant and children's wear, books, gift wrapping and a travel agency were on the 2nd floor. The 3rd floor housed juniors, ladies' dresses, coats and "better" sportswear, and ladies' underwear. That floor also gave access to the parking deck via a skywalk over the alley, which housed a second bakery counter. Housewares and china were on the 4th floor, along with a 400-seat auditorium. The 5th floor housed the furniture department along with executive offices. The service desk and toy department were on the 6th floor, and the accounting department and other staff offices occupied the 7th floor.

The building was purchased for $1.6 million in 2000 by Bayer Properties for potential redevelopment. Bayer secured an "historic preservation certification" from the National Park Service to qualify for federal tax credits and received a $1 million low-interest loan from the City of Birmingham to facilitate redevelopment. In 2004 Operation New Birmingham put it on their 12 Most Wanted list of downtown buildings in need of renovation.

In January 2010 the company announced that Baker, Donelson, Bearman, Caldwell & Berkowitz had signed on as lead tenants, enabling it to proceed with a $60 million renovation. Bayer will relocate its own headquarters office to the project, which is also set to include 23,000 square feet of ground level retail and restaurant space, much of it facing the McWane Science Center. 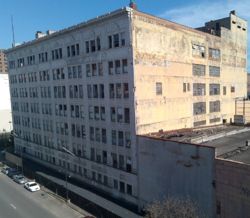 The Pizitz building in 2014

At the time, Bayer planned to seek LEED certification for the renovation. KPS Group, the architect for the project, also announced that it would move its offices to the Pizitz Building from the Steiner Building on 1st Avenue North. In March, V. Richards announced plans for a 6,000 square foot grocery store, cafe and restaurant on the ground floor. In September 2010 the Birmingham City Council approved a multi-million dollar incentives package to get the project under way. While completion was projected for the Summer or Fall of 2012, the project appears to be stagnant.

In December 2010 Baker Donelson determined that they would not be able to wait for the completion of renovations and, in March 2011, renewed their lease in the Wells Fargo Tower, forcing Bayer to search for new tenants. Meanwhile the city continued with approving parts of its incentives package for the project. Those incentives were rescinded in December 2011 pending further developments. For the next few years no progress was made toward renovation of the building. 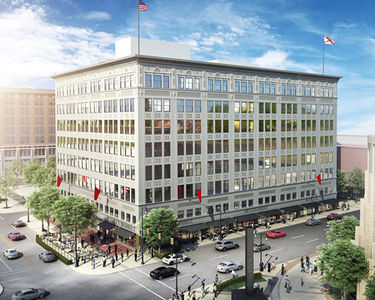 Rendering of the renovated building

In January 2014 Bayer announced that even though they deferred consideration for a first round of state tax credits for historic restoration, that they had decided to proceed with a $50-60 million apartment renovation project, set to begin in the summer for completion in late 2015 or early 2016. They partnered with Stonehenge Capital of Baton Rouge, Louisiana and hired Wisznia Architecture and Development of New Orleans to work with KPS Group on the design for what was branded as "The Pizitz".

Brasfield & Gorrie was awarded the $67 million contract for construction. In April 2014 Bayer's David Silverstein outlined plans for a public market on the ground floor with 24 vendor booths and 11,000 square feet of "beta" office space, leasable for short-term uses. The project was anticipated to open in Fall of 2016.

In January 2016 Bayer detailed their plans for the "Pizitz Food Hall" on the ground floor. The space includes a central bar and two full-service restaurants along with a rotating space for chefs to experiment with restaurant concepts on a quarter-by-quarter basis. Bayer also planned a basement level "entertainment space", which developed into a plan to create a year-round home for the Sidewalk Moving Picture Festival with office space and two 100-seat screening rooms.