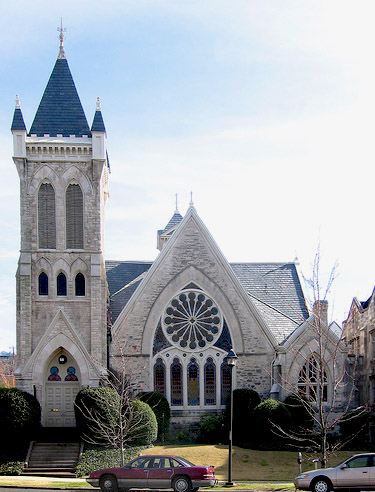 South Highland Presbyterian Church was founded as a mission of Birmingham's Third Presbyterian Church to serve the growing number of families in the newly-incorporated town of Highland. The request for organizing a new church was made, a year after the organization of Saint Mary's-on-the-Highlands Episcopal Church, in the form of a petition signed by a number of ladies living in the area. The first service, held at Taylor's School on Cottonwood Avenue (10th Court South), was led by the Presbytery's Evangelist, Paul C. Morton, who was called to organize the new church from Goodwater in Coosa County. He was succeeded by the church's first interim pastor, W. I. Sinnott in November.

A frame building was completed in February 1889 on a donated lot next to the school, now the site of the Parke Memorial Library. To raise funds, the Woman's Band of the church sewed and baked good to be sold at the Five Points Saturday Market. The first permanent pastor to take South Highland's pulpit was Alexander Phillips, who stayed a little more than a year. During his term, initial plans were made for the construction of a new sanctuary. A lot across from the Highland Town Hall, on the southwest corner of Highland Avenue and 21st Street South was purchased on June 11, 1890 from the Elyton Land Company for $2,500. Plans for an English Gothic Revival church in rough-faced limestone with slate roofs, a corner tower and large stained-glass windows with a seating capacity of 500 were drawn up by architect D. A. Helmich. To facilitate financing for the $30,000 building, the church was incorporated on October 18, 1891 as South Highlands Presbyterian Church1.

The cornerstone for the new building was laid on January 1, 1892. Around the same time, a mission to the convict miners at Pratt Mines Prison No. 2 was founded. The Woman's Band changed its name to the Woman's Foreign Mission Society and began sending part of their raised funds to toward foreign missions and part to the support of the Tuscaloosa Colored Institute. Another mission outpost was established in Shades Valley near the present Crestline Village. A parsonage was established on Rose Avenue.

The financial panic of 1893 introduced a period of precarious finances for the church, which continued until its debts had been paid off in September 1900. A pipe organ, built by Henry Pilcher and Sons of Louisville, Kentucky, and powered by municipal water pressure, was installed in 1903. Electrical service was brought to the church later that year. The membership rolls grew rapidly and mission activities expanded, with the Talladega Orphans Home and the TCI Mission in Ensley among those receiving funds. South Highland Presbyterian also materially supported the new Fairfield Presbyterian Church.

In 1911 a cottage and lot adjacent to the church building was purchased for $12,000 from Mrs Robert Redus. The house was used as a Sunday School, Offices and Pastor's Study and was expanded to accommodate more classrooms. With the old Sunday School rooms on the back of the original building vacated, the main sanctuary was expanded and reoriented.

Henry Edmonds came to Birmingham to pastor the church in 1913. Two years later he reported to the church's session that his theological beliefs had strayed from accepted Presbyterian doctrine. His beliefs divided the church and prompted the founding of a new Independent Presbyterian Church that October.

The membership of the church was greatly reduced by the split. Reverend Albert Johnson arrived in 1916 and presided over a "new beginning" for the congregation. In 1920 William Dobyns took over the pulpit, which he would keep until his death in 1932. During his tenure Boy Scout Troop 9 was founded, meeting at South Highland. The membership if the church grew to 500 by 1925 and a campaign was begun to build a new three-story Educational Building, designed by William Leslie Welton. Part of the money raised was used to buy the lone remaining lot between the church and the alley to its west. The house on the lot was rented out until the land was needed. A new organ, built by the Skinner Organ Company of Boston, was dedicated in December.

In 1938 the church celebrated its semi-centennial with a pageant composed of seven scenes depicting the history of the church. By the start of World War II the membership exceeded 990 and actually grew to 1065 during the course of the war. Initial plans were developed for needed physical expansion after the war. Al Mathes became the pastor in 1947. A new manse was purchased at 3911 10th Avenue South and a new chapel was built along with an addition to the Educational Building and renovations of the sanctuary. Church member Charles F. Davis, an architect, designed the additions. Soon a library was founded, and the space for it redesigned by Davis' wife Helen, also an architect. The building campaign was completed in December 1954 while the sanctuary remodeling continued.

In 1957 South Highlands hosted a Presbyterian General Assembly. The invitation was nearly recalled amidst fears of a backlash against having a racially-integrated meeting in Birmingham. The meeting was held without incident and was considered a great success. In 1958 the church purchased a new 40-rank organ from the M. P. Moller Company, and in 1959 the church began a still-running tradition of broadcasting its services on local radio.

In January 2020 a vandal broke windows around the church for several consecutive nights.