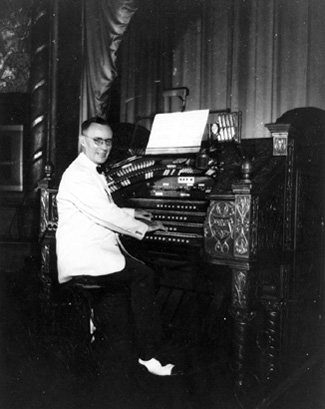 Stanleigh Malotte came from a musical family; his father, mother, and brother were also musicians. He began violin lessons at six and began taking organ lessons from his church choirmaster at 12.

Malotte first became a theatre organist for Sid Grauman on the west coast, but later got a job with the Paramount/Publix chain and wound up working for Francis Falkenburg at the Olympia Theatre in Miami, Florida. Malotte was in Miami for approximately ten years, doing some work on radio as well as later working as organist at the Capitol Theatre. Falkenburg brought in Malotte from Florida shortly after Falkenburg transferred to the Alabama Theatre. Malotte's first performance at the Alabama was on May 27, 1937.

During his time at the Alabama, Malotte was well known for rewriting the lyrics of popular songs of the time with lyrics pertaining to current events, from the local to national levels. He also often selected music to be performed based on the movie being shown. He was also known to drink quite a bit, although some maintain this actually made him a better entertainer. Malotte also played the organ for WAPI-AM from their studios in the Protective Life Building.

In August 1947 Malotte left his organist job to become a morning disc jockey at radio station WWSW in Pittsburgh. On September 19, The Birmingham News published on its front page a lengthy letter by Malotte that was highly critical of Pittsburgh and its residents, calling them "dim-witted citizens—a race of robots—human refuse . . . with a complete absence of social consciousness . . . ." He was fired from his job by program director Fred Joyner the day the letter was published, although Joyner cited Malotte's failure to come to work twice that week as the cause. A few days later, the Alabama announced Malotte would be returning to its organ console on October 2.

After leaving the Alabama Theatre in 1955, Malotte was associated with the Hammond Organ Company. He also wrote material for television and commercials. Malotte later returned to his birthplace of Philadelphia. He died of a heart attack in New York City.

On October 19, 1991, a special tribute was held in honor of Stanleigh Malotte. This was the official presentation of his star in the Alabama Walk of Fame. His son, Stanleigh Malotte, Jr. was scheduled to attend, but was unable to due to his ill health.