WAPI-AM (called Alabama's Big Talker 1070) is a talk radio format AM station broadcasting at 1070 KHz. The station is licensed to Birmingham and broadcast at 50 KW (day)/5 KW (night) from an pair of directional towers near Sandusky north of Birmingham (map). The station's daytime coverage area includes most of the state from Montgomery north and stretching toward Rome, Georgia and Tupelo, Mississippi. The low-power evening range is confined to the Birmingham Area with a small directional transmitter aimed into Walker County and the larger one covering Birmingham, Bessemer and Hoover, extending as far as Clanton and Talladega. The station's studios are located at Cumulus Media's local headquarters at 244 Goodwin Crest Drive on Red Mountain. The station's general manager is Dale Daniels, and Frank Giardina is program director.

The call letters "WAPI" stand for the Alabama Polytechnic Institute at Auburn, which took over equipment from Alabama Power Company's defunct WSY-AM station in 1925 and merged it with its own WMAV-AM equipment on campus. The Federal Radio Commission was established in 1927 and assigned WAPI to five different frequencies over the course of that year.

Three years later, in 1928 WAPI moved back to Birmingham to provide a big city market for the two-year-old NBC Radio Network. The City of Birmingham agreed to pay half the operating costs for the station. Negotiations began with other state universities interesting in radio broadcasting, and from 1929 to 1932 the station was jointly-owned by Auburn (39%), the University of Alabama (39%), and the Alabama College for Women in Montevallo (22%).

NBC approved the affiliation on March 24, 1929. On November 11 of that year the FRC approved a power increase to 5,000 Watts, and the new WAPI began broadcasting red and blue network NBC programming from studios on the 14th floor of the Protective Life Building downtown on December 31, 1929. In 1930 the city's budget, which had declined precipitously at the start of the Great Depression, required it to withdraw its funding. As a result, the station began accepting local commercial programming for the first time. By 1931 the station was having difficulty staying afloat and applied to the FRC to boost power to 50 Kilowatts. Attorney Oscar W. Underwood, Jr represented the station using a $100 grant from the Birmingham Chamber of Commerce. Only half the request was approved, and ultimately the station was unable to afford the equipment needed.

In 1932 WAPI became a private business, with W. O. Pape forming the WAPI Broadcasting Company to lease the station. A year later, he sold his interest to Bascomb H. Hopson, who created, in turn, the WAPI Broadcasting Corporation and shared the frequency with Tulsa, Oklahoma's KVOO. B. H. Hopson was president and general manager in 1936, with three staff members: Beatrice Tate Wright was studio and production manager, J. L. Middlebrooks was chief engineer, and Fred Steele was sales manager. On August 1, 1937 the lease was sold to Ed Norton and Thad Holt, who sub-leased to "The Voice of Alabama", with an agreement to boost power to 50,000 Watts.

Norton borrowed $50,000 from Birmingham Trust National Bank and he and Holt negotiated with the CBS network to invest in half the cost of the upgrades. With a 45% interest in the station, CBS took over programming in 1940 and provided engineer Victor J. Andrew to help design a directional antenna array to avoid interference with KVOO and other stations in Los Angeles and Nova Scotia. Another station engineer tested the signals from outside Memphis, Tennessee and found the directional array successful.

Nevertheless, in 1941 the American entry into World War II created many changes. WAPI and KVOO were moved to AM 1170 under the North American Regional Broadcasting Agreement (NARBA). WAPI soon moved down the dial to 1070 under a Special Temporary Authority and regained their permit to broadcast full time. Meanwhile the U. S. Army appropriated all unused radio transmitters, delaying the station's power upgrade until well into the Cold War.

By 1942 the station's move to 1070 was made permanent. In 1949, WAPI's owners launched WAFM-TV (Channel 13), Alabama's first television broadcast station. A few years earlier WAFM-FM, WAPI's sister FM station at FM 99.5 had been launched as well. The station's "Parade of Stars" in this period included newscaster Owen Spann. 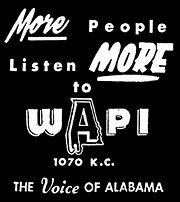 In 1952 the station did increase power, to 10,000 Watts. 1953 The Birmingham News Company bought the trio of stations and moved their studios to Red Mountain. The following year, WAPI returned to the NBC network, where it remained through the rest of the decade until local programming superseded the national networks. Legendary radio personality Joe Rumore began working as an announcer for WAPI before moving to WVOK. The three stations, as well as the News were bought out by S. I. Newhouse in 1956. Two years later, the 50,000 Watt power upgrade was approved for daytime broadcasting. Daily popular music programs in the late 1950s were hosted by Leland Childs, Jim Lucas and Hop Edwards.

The station evolved into an "adult contemporary" format by the 1970s as pop music passed it by. Additional WAPI personalities of the time included Dick Breit and "Cousin Cliff" Holman, both of whom also worked on WAPI's sister TV station.

In 1980 the FCC mandated that Newhouse split off its media interests. Channel 13, which had since had its call letters changed to WAPI-TV, was sold to Times-Mirror Broadcasting, and the radio stations moved from Red Mountain to newly-equipped studios at 2146 Highland Avenue. A year later Mobile radio mogul Bernie Dittman bought the radio stations. In 1985 the format was changed to "adult standards", and on January 1, 1996 WAPI became an all-news station. It has since dropped most of its news programming in favor of syndicated talk radio.