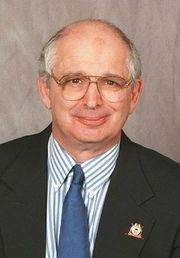 Clarkson grew up in Southern California and attended Beverly Hills High School for two years before graduating from Fairfax High School in West Hollywood in 1958. He earned an associates degree in business at Los Angeles City College in 1962 and played football at California State University Northridge, graduating in 1966 with a bachelor of arts in history. While in school he played semi-professional football with the short-lived Rhode Island Indians of the Continental League, but was forced out by knee injury before the end of their only season in 1965.

Clarkson moved back to California as an insurance salesman before returning to football as director of season ticket sales for the Southern California Sun of the World Football League. He transferred to the same role for John Bassett's Memphis Southmen before the league folded in the middle of the 1975 season.

Denny McClain then hired Clarkson as assistant general manager of the Memphis Blues, which played in the Triple-A International League. That team folded at the end of his first season, and Clarkson relocated to Norfolk, Virginia as an assistant to Tidewater Tides general manager Dave Rosenfield. While there he met his second wife, Kathy.

In 1978 Clarkson was hired by Avron Fogleman as general manager of the newly-created Memphis Chicks of the AA Southern League. He succeeded in building up attendance to over 320,000 in his third year. During the 1979 season Clarkson visited Birmingham and discussed prospects for Rickwood Field with sportscaster and Birmingham Parks and Recreation Board member John Forney. Clarkson's efforts to pursue a franchise for Birmingham cost him his job with the Chicks. He took a job with the North American Soccer League's Detroit Express and later worked for the AAA Wichita Aeros of the American Association, but continued to pursue the opportunity to bring a baseball team to Rickwood.

His efforts paid off in 1980 when Clarkson partnered with the ownership group of the Montgomery Rebels and investors Bob Scranton, Bill Baxley and Jack Levin to move the team to Birmingham as the 1981 Birmingham Barons. The move was successful, with the Barons winning the 1983 Southern League pennant and attracting 250,000 fans to watch them play. The growing excitement led in an unexpected direction when Clarkson found himself unable to secure a commitment from the City of Birmingham to invest more money in repairs and maintenance of the historic West End stadium or to build a new facility at McLendon Park or Fair Park. Clarkson was also brushed off when he began pitching the idea of a domed stadium to attract a potential NFL franchise to the city.

In 1987 the Barons reached an agreement with the City of Hoover to move into the newly-built 10,000 seat Hoover Metropolitan Stadium. Clarkson was named "Executive of the Year" by the Southern League in 1979, 1982, 1983 and 1988. In 1990 Clarkson negotiated the sale of the Barons to Suntory International of Osaka, Japan.

Over the next year Clarkson worked on a plan to relocate the AA Charlotte Knights to New Orleans, Louisiana. His bid was passed over in favor of another groups proposal to bring the AAA Denver Zephyrs to the Crescent City. In 1992 Clarkson joined with Bob Polk, Doug Kirchhofer, Ron Fuller and Robert Fuller to bring an East Coast Hockey League franchise to the Birmingham-Jefferson Civic Center. They purchased the Cincinnati Cyclones and began play as the Birmingham Bulls in October 1992. In 1998 Clarkson negotiated the sale of the team to the David Berkman Group of Atlanta, Georgia. The team struggled on and off the ice for the next few seasons and Berkman sold the franchise to George Shinn, who relocated the team to Atlantic City, New Jersey in 2001.

During that time, Clarkson launched the Tennessee Valley Vipers that played in Huntsville's Von Braun Center as part of the XFL, af2 and United Indoor Football leagues. He oversaw operations for that team until 2005. In 2002 UAB Blazers athletic director Watson Brown hired Clarkson as a marketing consultant. In 2006 Clarkson was inducted into the Birmingham Barons Hall of Fame.

In 2005 Clarkson moved with the former Vipers to Rockville, Illinois as the Rock River Raptors in the United Indoor Football league. Soon later he took over operations of the Mississippi Surge of the Southern Professional Hockey League (SPHL). From there he moved to Wisconsin to work for the Green Bay Blizzard of the Indoor Football League, and later to the IFL's Colorado Ice.

Clarkson returned to Birmingham in 2017 with plans to launch a new Birmingham Bulls hockey team in the SPHL by relocating the Columbus Cottonmouths from Georgia. His efforts to negotiate with Legacy Arena director Tad Snider were not fruitful and the team began play at the Pelham Civic Complex.