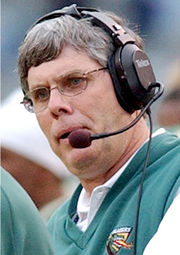 Brown, the grandson of Eddie "Jelly" Watson, who brought high school football to Cookeville, played shortstop quarterback at Putnam County High School. Along with his younger brother Mack (now the head coach at the University of Texas). In 1967 they won the Tennessee state championship, and Watson was named to the All-State team. He accepted a scholarship to Vanderbilt, where he quarterbacked from 1969 to 1972, including a 14-10 upset of the Alabama Crimson Tide in his first season.

In 1973 Brown started coaching as a graduate assistant at his alma mater, becoming a full-time assistant at East Carolina under Pat Dye the following year. In 1976 he took the job as offensive coordinator at Jacksonville State University, going to the Division II national championship in 1977. The following year he coached quarterbacks and receivers at Texas Tech.

In 1979, Brown was hired for two seasons as the head coach at Austin Peay State. His next coaching job came in 1983, when he led the Cincinnati Bearcats for one season. He left that job for the opening at Rice University in Houston in 1984. A year later he also assumed the role of athletic director. In 1986 he moved to Vanderbilt University in Nashville where he coached the Commodores for four seasons, through 1990, when he was replaced by Gerry DiNardo. He then went to Mississippi State to be the Bulldogs offensive coordinator. In 1993 he accepted the same role at the University of Oklahoma.

He was hired to succeed Jim Hilyer as the head coach at UAB in 1995. At the time, UAB was playing in the NCAA's Division I-AA. Brown oversaw the transition to Division I-A in 1996. The team debuted as a football-playing member of Conference USA in 1999, finishing that first season in a tie for second place in the conference.

In November 2002, he took on the added responsibilities of the job of athletics director, in which he had served in an interim role for five months after the resignation of Herman Frazier. He was given responsibility for reducing the overall deficit of the UAB Blazers athletic department from $7.6 million following an ultimatum from the University of Alabama Board of Trustees. He solicited private donations and began scheduling away games with larger schools offering big payouts, closing the deficit to around $5 million. In 2003 incoming UAB president Carol Garrison presented Brown's progress to the Board of Trustees and convinced them to rescind their ultimatum. Brown's 2004 team responded to the pressure by becoming bowl-eligible. The team was rewarded with a trip to the Hawai'i Bowl.

In December 2005, Brown stepped down as athletic director to devote his full attention to the football program. After the 2006 season, in which the Blazers went 3-9, ending the year with six straight losses, Brown resigned as head coach.

It was announced on December 9, 2006 that he would return to his hometown to become head coach for Tennessee Tech. He coached the Golden Eagles for 9 seasons, Brown retired from coaching on December 2, 2015.

Brown is married to the former Brenda Arnold and has two children, Ginny and Steven.