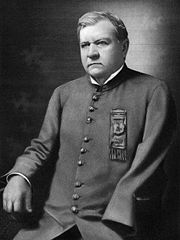 Edmund Winchester Rucker (born July 22, 1835 in Rutherford County, Tennessee; died April 13, 1924 in Birmingham) was a brigade commander in the Confederate Army during the Civil War.

Rucker was one of eight children born to Edmund and Louisa O. Winchester Rucker on their farm near Murfreesboro, Tennessee. He received some education in neighboring Wilson County, then moved to Nashville in 1853 to seek employment, and eventually found work on a crew surveying the route of the Tennessee & Alabama Railroad between there and Decatur. He started off clearing brush, but learned to use the rod, chain and level as he went, and studying mathematics and engineering with his superiors. From there he joined a surveying party working on the Nashville & Northwestern Railroad, then moved to Memphis in 1856 as a surveyor. He was elected city engineer there in 1858 and held that job until the beginning of the Civil War.

Rucker enlisted in W. D. Pickett's company of sappers and miners in April 1861. The company was sent to Columbus, Kentucky to mount guns under the fortifications there. His effectiveness was noted and he was appointed a lieutenant of engineers by Tennessee's Governor. After a group of Illinois men reported at the fort to enlist in the Confederate Army, Rucker was commissioned as their Captain. The company was issued four large guns and drilled for two months in their operation. After the evacuation of Columbus, the company was sent to arm a battery on the Mississippi River, on a prominence commanding Island No. 10. The emplacement was bombarded by a Union flotilla on March 17, 1862. Despite a furious fusillade, the Union guns' greater range neutralized the emplacement. Rucker and 15 men escaped to the mainland, where he was commended for his valor.

From there, Rucker was sent to meet General Polk at Corinth, Mississippi, then accompanied General Nathan Bedford Forrest and Colonel James Sanders to Chattanooga. He was delayed when his horse foundered two days outside the city, and reached Chattanooga after Forrest's brigade had departed for Murfreesboro. General McCowan ordered him instead to Knoxville. He took command of the 12th Battalion's camp at Kingston, and then was assigned to enforce Tennessee's conscript law in the vicinity, a disagreeable duty that brought heavy casualties from guerilla Unionists and deserters.

Now a Major, Rucker continued to keep order in East Tennessee until Chattanooga was evacuated. He was put in charge of removing the infantry and artillery from in and around the city and, with his cavalry, to cover the retreat of the Confederate army to Chickamauga, where he was reunited with Forrest. Together their forces drove the Union army back to Chattanooga. In the Spring of 1864, Rucker reported again to Forrest in Mississippi and was assigned what became known as "Rucker's Brigade" of five regiments. They fought at Brice's Crossroads and Harrisburg, where he was wounded in the right arm and right leg. He was taken by ambulance to Aberdeen, Mississippi where he spent months recovering. After rejoining his command, he led them on a charge which drove the Union back into Nashville. His brigade supported General Hood's siege of the city. He found himself behind enemy lines on December 16, and was spotted. A bullet shattered his left arm as he attempted to ride to safety, and he was thrown into a pile of rails and captured.

Though he was a prisoner, he bunked with Colonel Hatch, who ministered to the injured Major's wounds and offered him his bed before he could be sent to the hospital in Nashville the next morning. After his arm was amputated, he was imprisoned at Johnson's Island. General Forrest negotiated for his release in an exchange of prisoners, and he returned to Alabama. He was in Forrest's company when it surrendered at Gainesville in Sumter County. The title of "General" was an honorarium given him following the war.

Rucker helped establish the Town of Highland, south of Birmingham and developed an area which became known as Nabob Hill. He built a home for himself at 1715 12th Avenue South, one for his son on the same block, and the Walter Agee residence on the next block for his daughter and son-in-law as a wedding gift in 1900. He was a parishioner of St Mary's on-the-Highlands Episcopal Church.

Rucker is buried at Oak Hill Cemetery. Camp Rucker (now Fort Rucker), established in 1942 in Dale County, was named in his honor.