This article is about the former Governor. For the shoe department manager for Louis Saks Clothiers, see Joseph E. Johnston. 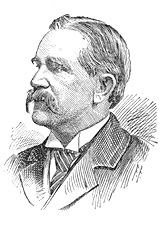 Joseph Forney Johnston (born March 23, 1843 at Mount Welcome in Lincoln County, North Carolina; died August 8, 1913 in Washington D.C.) was Governor of Alabama from 1896 to 1900. He later served in the U.S. Senate from 1907 to his death in 1913. During his time as a senator, he was chairman of the Committee to Establish a University of the United States.

Johnston attended the rural public schools in North Carolina during his youth. He moved to Talladega at the age of seventeen, and attended a military academy. At the outbreak of the Civil War, Johnston enlisted as a private in the Confederate States Army. Johnston served through the duration of the war, receiving wounds at Chickamauga, Spotsylvania, New Market, and Petersburg. By war's end, he attained the rank of captain.

After returning from the war, Johnston studied law under William H. Forney and was admitted to the bar. He practiced law in Selma, eventually moving to Birmingham to become president of the Alabama National Bank. He also invested in Birmingham's industries, purchasing the Cahaba Iron Works in 1876. In 1887, Johnston became president of the Sloss Iron & Steel Company.

Johnston first entered the political arena in 1890, when he ran for governor, but lost to William C. Oates. In 1896, he again ran for Governor and succeeded, serving two consecutive two-year terms as Governor of Alabama. Johnston's achievements during his tenure as governor include tax reform, creation of the Alabama Department of Insurance, and the establishment of a state mine inspector.

Johnston decided not to seek another term as Governor in 1900, and instead challenged John Tyler Morgan in that year's Senate election. Morgan defeated Johnston, and in 1902, Johnston sought a third term as Governor against incumbent William Jelks. The revelation of several scandals involving Sloss Iron & Steel, as well as misconduct in the prison system hurt Johnston and he would ultimately lose the election.

Johnston did attain political office again, however, by being elected to complete Senator Edmund Pettus's term after Pettus died in office in 1907. Johnston was re-elected in 1909, and served in the Senate until his death from pneumonia in 1913.

Johnston was married to Theresa Virginia Hooper of South Carolina. They had three sons: William Hooper, Edward Douglas, and Forney. He is buried in Birmingham's Elmwood Cemetery.