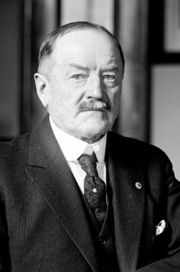 White was and raised in Noxubee County, Mississippi. After serving as a teenager in the Civil War he pursued the study of law. He was admitted to the bar in 1869 and practiced in West Point, Mississippi. He was elected to the Mississippi House of Representatives in 1875 and again in 1882-83. In 1886 he moved his law practice to Birmingham and partnered with James Weatherly, and later with Frank Dixon.

Following the upheavals of the 1892 and 1896 elections in which the state Democratic party was split between populist candidates who had gone so far as to court African-American voters, and "Bourbon" old-money interests, who managed to hold onto office through blatant election fraud, White emerged as a leader among those seeking to reunite the Alabama Democratic Party and its hold over statewide politics. During the 1900 Alabama Democratic Party Convention White said, "We cannot afford to live with our feet upon fraud. We have disenfranchised the African in the past by doubtful methods, but in the future we will disenfranchise him by law." Accordingly, White was appointed as a delegate-at-large to the convention that drafted the 1901 Alabama Constitution, and served on the convention's suffrage committee.

After Senator Joseph Johnston died of pneumonia in 1913, Governor Emmet O'Neal appointed Franklin Glass to serve the remainder of his term. The Senate Committee of Elections and Privileges objected to the appointment because the newly-ratified 17th Amendment supported an Alabama state law requiring a special election to fill a vacant Senate seat. White was nominated and won the special election. He was therefore the first Senator from Alabama to be directly elected by state voters.

White served in the Senate from May 11, 1914 to March 3, 1915 and did not seek renomination for a full 6-year term. Oscar Underwood succeeded him in the Senate.

White died in Birmingham in 1922 and is buried at Elmwood Cemetery. He was survived by his wife, Octavia Anna Collins White, and three children: William, Frank and Marguerite.