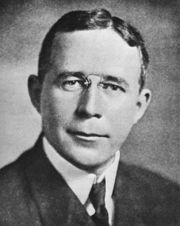 Crawford, the son of George Gilmore and Margaret Reed (Howard) Crawford, was raised on his family's plantation in Madison, Georgia. He was one of two seniors in the first graduating class at the Georgia Institute of Technology in Atlanta in 1890. Crawford went on to study metallurgy at the graduate level at the Eberhard Karls University in Tübingen, Germany.

After returning to the United States in 1892, Crawford took a job as a draftsman for the Sloss Iron & Steel Company in Birmingham. He left in 1893 to become a chemist for the Carnegie Steel Company's Edgar Thomas Works in Braddock, Pennsylvania and was promoted to assistant superintendent of blast furnaces. In 1897 he was assigned to superintend the blast furnaces at McKeesport, Pennsylvania, then returned to Braddock in 1899 as superintendent of the furnaces at the Edgar Thomas Works.

In 1901 Crawford was put in charge of managing the production plants of the National Tube Works in McKeesport. In November 1907, after its purchase by U.S. Steel, he was made president of the Tennessee Coal, Iron and Railroad Company and moved back to Birmingham. He lived briefly at the newly-built Terrace Court apartments before constructing his own residence in Mountain Brook.

As president of TCI, Crawford oversaw major expansions of the company's industrial plants. Over $30 million in improvements were made to the Ensley Works over the next six years, returning drastic improvements in quality after only 18 months, reducing the scrap yield of newly-made rail from 40% to 10% while cutting costs from $29 to $20 per ton. In 1912 the Ensley works produced 840,000 tons of steel, by far leading all Southern competitors. During World War I wartime demand required the Ensley plant to continue increasing capacity. By 1920 Ensley's furnaces could output 1.25 million tons.

He oversaw development of the Fairfield Works, which initially focused on finishing steel ingots produced in Ensley, and participated in the completion of new plant for U.S. Steel's American Steel & Wire Co., which opened in 1914. To aid in the district's efforts to recruit new executives and new businesses, he worked with Robert Jemison Jr to develop the imposing Tutwiler Hotel.

Crawford also invested in facilities to improve the company's labor force, beginning with the abolition of convict leasing at TCI mines in 1912. In addition to the carefully-planned city of Fairfield (originally called "Corey"), he planned a series of "model mining villages" at Docena, Bayview, and Edgewater which offered quality housing, schools and social welfare programs as inducements to more stable workers with families. He also directed the construction of the TCI Hospital, headed by Lloyd Noland. His efforts to stabilize the company's labor force were markedly successful.

Crawford left in 1930 to accept the presidency of the Jones and Laughlin Steel Company in Pittsburgh, Pennsylvania. He returned to Birmingham in retirement and died in Fairfield in 1936. He is buried at Elmwood Cemetery. He was inducted into the Alabama Business Hall of Fame in 1980.