This article is about Southside apartment building. For the street in Fairfield, see Terrace Court (Fairfield street). 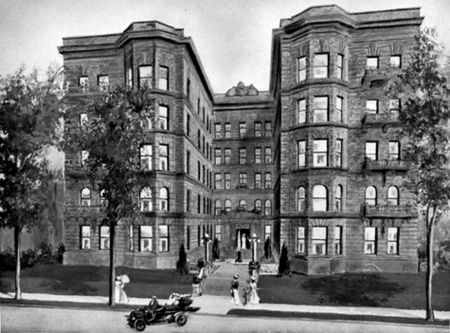 Architect's rendering of Terrace Court with 5 floors, published in 1908

Terrace Court is a landmark apartment building at the corner of Highland Avenue and 20th Street South near Five Points South. The six-story was developed by Richard Massey for $180,000 and billed as the first high-class apartment building south of Washington D. C. The original configuration included 24 apartments arranged in an H-shape around deep light-filled courts. The ground floor and first floor provided leasable spaces for retailers and office tenants.

The building was designed by William Weston and represented a rare early use of reinforced concrete. The exterior was clad in gold-toned pressed brick with dark-brown terra cotta trim. Wrought-iron balconies served each apartment. A grand stair of white marble led to the porticoed entrance on the main courtyard. The design incorporated several innovative amenities for tenants. Sand was packed into the voids in the wall tiles and floor arches to help sound-proof the building.

Terrace Court was constructed during turbulent economic times, and Massey employed non-union labor. According to Massey's daughter, workmen from a builder's union, then striking, raided the site, murdering a night watchman and sabotaging the plumbing system. Nevertheless, the landmark project was completed in 1907. It was "christened" by Miss Lucille Gaston at an invitation-only event on the evening of Friday, November 6. Governor William Jelks remarked: "There may be other Terrace Courts in the future, but those who erect them will be copyists."

In January 1934, Massey told Hill Ferguson in a letter that his return on the Terrace Court investment had been very small, and would have run into debt had he borrowed to finance construction.

In 2006, Boothby Realty and its investment partners announced a $5 million plan to redevelop Terrace Court as the Terrace on Highland Condominiums. Plans called for 26 condominiums, ranging from 875 to 1,928 square feet, designed by Cohen Carnaggio Reynolds architects. The units were to be priced at $298,000 to $695,000. The courtyard and lobby areas would be restored closer to their original appearance, including a pre-Nazi party swastika design in the lobby tile. A fitness center and concierge were planned amenities for residents. Completion of the renovations was scheduled for 2007. Only the spot occupied by Dave's Pub would remain as commercial space. That plan did not proceed, and the property was foreclosed on by Regions Bank.

In 2010, Red Mountain Development announced a new proposal to purchase and renovate the building for $3.8 million. They plan 40 apartments with a new 44-space covered parking structure across 12th Avenue, as well as 14,000 square feet of retail and office space. A new terrace dining area on the right side of the front facade would complement the existing terrace at Dave's Pub for a new restaurant. A 24-hour fitness center for tenants was also planned. Cohen Carnaggio Reynolds once again provided design services, and Capstone Development Corporation was the general contractor. The retail/parking structure and new restaurant were never realized.

In 2018 the building was sold a group of local investors led by Adam Eason for $2.9 million. They carried out significant renovations and sold it to another group, led by Bret Connor, in June 2021 for $5.25 million.