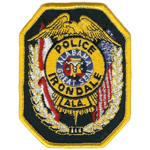 The department has a outdoor firing range adjacent to Ruffner Mountain Nature Preserve at 750 Ruffner Road, and opened a training facility at Grants Mill Station shopping center in 2013. The department's drug detection dog, J-R, began his duty in 2001 and served for 13 years.

A memorial plaque honoring Rex Winchester, an Irondale Police officer who was shot and killed while on duty on July 12, 1983, is displayed outside the department's offices, having been moved from across the street in 2018.