Little Professor Book Center is an independently-owned bookstore currently located at 2844 18th Street South in downtown Homewood. Although Paul and Diane Seitz opened it as part of a nationwide franchise with more than 120 stores, the surviving Homewood location is now one of only three Little Professor stores still open. 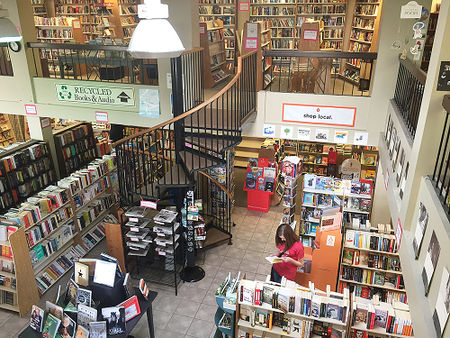 Interior of Little Professor in January 2017

In the late 1980's, an arsonist set a fire between the Homewood Little Professor store and an antique store behind it. The bookstore was declared a total loss by the insurance company, primarily because of smoke damage to the inventory. The store was allowed to sell any intact books at a substantial discount, however, and did so out of their parking lot for a week or two. After the damage was repaired and new inventory secured, Little Professor reopened.

In 2016 the Seitzes sold the building to Capstone Companies headed by developer Michael Mouron. The store closed in January and reopened in March in the former Let's Get Organized location at 2844 18th Street South.

In January 2020, the Seitzes sold the store to new owners and retired. Within the first year under Jonathan and Meredith Robinson, Little Professor refreshed its branding and implemented a membership program and began weekly book readings by Homewood locals and began offering birthday party packages. The Robinsons decided to stop sales of magazines and greeting cards to focus on books.

In 2022 Little Professor opened a second shop in the Dr Pepper Bottling Plant at 2807 2nd Avenue South at Pepper Place. The shop hosted "pop-up" events during the Pepper Place Saturday Market prior to opening for regular hours. The Lakeview shop also serves coffee and alcoholic beverages.