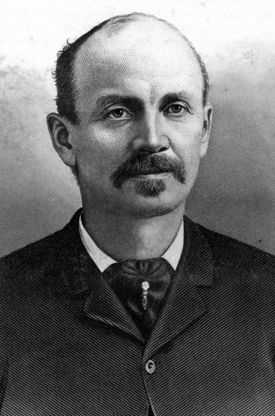 Llewelyn William Johns (born November 10, 1844 in Pontypridd, South Wales; died February 4, 1913 at The Elms) was the chief mining engineer for the Pratt Coal and Coke Company and the Republic Steel & Iron Company.

Johns was the son of William Tregolwyn and Catherine Hopkins Johns of Glamorganshire, Wales and was the product of a long line of mine engineers. With the field crowded by his brothers, he took to speculating and amassed a small fortune as a concessionaire to mine operators. He supported the miners during the strike of 1850, but never recovered his lost business. He proceeded to train in engineering at the Western Academy in Bath for fifteen months before withdrawing to help his family by taking a job at a government chain works in his home town. From there, he was consigned to work in the mines himself. His health deteriorated, though, and unable to secure a better position, he made his way, at age 18, to Liverpool to seek passage to America.

Johns arrived in New York Harbor on April 3, 1863, Good Friday. He took a room at a boarding house on Greenwich Street with the last of his funds. He spent the next day walking around the city until he found a surveyor working in Central Park. Within a week he had earned a full-time position with T. H. Tomlinson, but left after three months, apparently infected with a restless need to see more of the country, and to spend his funds as quickly as he could earn them.

Johns worked for the Lehigh Valley Railroad in Allentown, Pennsylvania, and then in the coal mining district of Wilkes-Barre. In 1864 he moved to Chicago to work for the Lake Shore Railroad's car works, then to Omaha, Nebraska, where he helped construct bridges for the Union Pacific Railroad, traveling with its crews to Cheyenne, Wyoming and Ogden and Salt Lake, Utah. Hearing of gold found in Montana he drove an ox-team three hundred miles to Helena where he was lucky to find a position assisting an Englishman residing there.

The next spring, Johns made his way to the Placer Mines in Lost Chance Gulch. He redeemed an abandoned claim and worked it successfully, taking $15,000 in gold dust. He invested in a partnership with a sawmill operator to build a 12-mile long flume. The project ran out of funds when it was only half-completed, though, and Johns, again penniless, borrowed three dollars from a friend at Deer Lodge and took the stage to Pioche, Nevada, working the mines there through the winter to acquire enough money to return East.

After returning to Pennsylvania in 1868, Johns worked in mines and helped build cars for the Honeybrook Coal Company. He was soon promoted to the position of mining and mechanical engineer for the company and remained there for two years. During his time there he survived a mine cave-in that trapped him underground for 14 hours.

Johns left Honeybrook to assist Major W. R. Thomas at Lime Ridge, Pennsylvania. It was the Thomas family, into which his sister had married, that later induced him to come to the South. Major Thomas left in early 1872 to participate in construction of an iron furnace at Rising Fawn, Georgia. Johns soon began making his way to follow him. In the fall he reached in the the newly laid out city of Birmingham, again penniless and needing work. He happened to run into Frank O'Brien, who was the son of his former supervisor in Scranton. O'Brien gave him work as a carpenter until he could find a better-paying job in the mines assisting J. T. Pierce in the development of works at Warrior.

During the 1873 cholera epidemic, Johns went ahead to Rising Fawn and was placed in charge of constructing the coal mining works for the furnace, and twice survived close calls with runaway mine cars. The local coals proved too poor for the purpose and the company failed in the Panic of 1873. Johns suffered another period of poverty before he was eventually paid the wages owed him by the the company's new owner. He married the former Hanna Jane ("Jenny") Scott, an English immigrant, in September 1874.

In 1875 Johns traveled alone to California by way of St Louis, Missouri, but soon turned back toward Virginia City, Nevada where silver was being mined. He began working as a carpenter, but soon proved his skill and was hired as timber boss, and then assistant engineer, for the Ophir Mines. He survived another cave-in there, where temperatures below ground reached 150 degrees. Johns invested his earnings in mine share margins, and again lost his meager fortune.

Johns returned to his wife in Georgia that same fall and worked for a while at the re-started furnace. James Thomas hired him away in 1877 to help supervise the coal mines and coke ovens at Helena that would supply the Oxmoor Furnace. He prevailed in a dispute with fellow superintendent Hopkins and succeeded him in that position, opening the Black Shale Mine, Little Pittsburg Mine, and Helena Mine and constructing more than 100 coke ovens. He added to his record of escaping death from cave-ins and runaway mine cars, surviving several incidents in the Helena mines.

The works at Helena were bought in 1879 by Henry DeBardeleben and Johns became mining engineer for the DeBardeleben Coal & Iron Company, and later for Enoch Ensley's Pratt Coal and Coke Company. He assisted Billy Goold in surveying much of the Birmingham district and was placed in charge of the Pratt Mines, which produced high-quality coking coal for Alice Furnace and others. He opened the Pratt Slope No. 2 and the vertical Ellen Shaft in 1880, doubling the output. The works at Pratt continued to expand through the 1880s with several drift operations and the opening of numerous headings in the Laura Slope and Enoch Slope. His penchant for close calls followed him to Pratt and he survived the explosion of a steam pump at Village Creek and a natural gas explosion in the Ellen Shaft on July 17, 1885.

Johns remained with the company through the sale of its works to the Tennessee Coal, Iron & Railroad Company and Republic Steel & Iron Company. When Thomas Jones was elected Governor of Alabama in 1890, he appointed Johns as a colonel in his staff.

Having settled down with Jenny and their four children he finally was able to amass a secure fortune, which he invested more wisely than he had as a youth. He was respected as a prominent figure in the development of the Birmingham District's mineral resources. He retired from active work before 1903 and constructed a home on a 20-acre estate south of downtown which he called The Elms. There he displayed, in glass cases, his old school uniform and the "Indian suit" that he wore scouting North Alabama with Goold.

Johns was active in the Order of the Elks Birmingham Lodge No. 79 and donated a large plot at Woodlawn Cemetery for use by the group.

He died at his estate in 1913 and is buried alongside his wife under a large, sculpted monument at Forest Hills Cemetery. A group of close friends, called the Welsh Boys, sang hymns at the graveside in his native language.

Pratt's Johns Mine and "King John" blast furnace were both named for him. The town of North Johns, near the former mine, preserves the association. Johns' son, Wallace went on to establish the Johns Funeral Home in 1899.