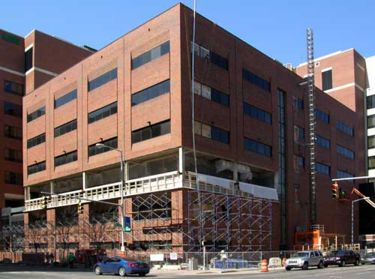 Under renovation in March 2010

UAB's Cancer Program was established in 1970 with $5 million in seed funding from the Lurleen Wallace Courage Crusade. That campaign was launched by Governor Albert Brewer in memory of his predecessor, Lurleen Wallace, who died of cancer in 1968 following years of treatment for which she had to travel to Texas. Additional funds were provided by the National Cancer Institute and the university.

John Durant led efforts to plan and develop the program, which was recognized as one of eight original regional "Comprehensive Cancer Centers" under the National Cancer Act of 1971. The Wallace Tumor Institute building opened in 1976, followed by the Lurleen B. Wallace Tower, an 80-bed inpatient facility, in 1979. A capital campaign launched in 1985 provided funding for a DNA sequencer and a 600 MHz nuclear magnetic resonance spectrometer to be acquired in 1987 and 1988 respectively.

The center's facilities were expanded in 1992, with ambulatory care facilities relocated to the newly-opened Kirklin Clinic. Among the new laboratories created was a Pathogen Free Rodent facility, partially funded by the NCI.