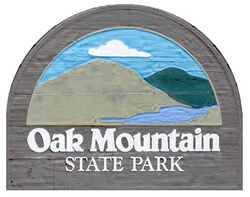 Oak Mountain State Park is a 9,940-acre State Park, the largest in Alabama. It is located 15 miles south of downtown Birmingham, encompassing the forested Double Oak Mountain, one of the last foothills of the Appalachian range. The park provides hiking, camping, golf, waterfalls, swimming, a BMX track, a demonstration farm, horseback riding, mountain biking, and fishing among other attractions, and is managed by the Alabama Department of Conservation and Natural Resources.

Oak Mountain State Park houses the Alabama Wildlife Center, which is responsible for the rehabilitation of over 2,000 injured and orphaned wild animals each year, and the Oak Mountain Interpretive Center, which provides classroom and laboratory space for biology and ecology classes along with nature exhibits for visitors. It is the site of the annual XTERRA Southeast Championship in the Spring, the Bump N' Grind mountain bike weekend in June, and the Peavine Falls Run, held each July 4.

The main entrance to the park is located on State Park Road off Cahaba Valley Road (Alabama Highway 119) near Exit 246 from I-65. A second entrance is located about five miles east on Highway 119, 3 miles from U. S. Highway 280.

Oak Mountain State Park was created under the Alabama State Land Act of 1927, and originally consisted of only 940 acres. An additional 8,000 acres surrounding the park was acquired by the National Park Service in the early 1930s, with an eye toward establishing a National Park in the area.

Beginning in early 1934, Civilian Conservation Corps, Company 487 began building road access from Montgomery Highway to the foot of Double Oak Mountain. By October of that year, the company was cutting roads and fire breaks in the park itself. They eventually created Peavine Road and Red Road and numerous culverts and other improvements using rock quarried on site. That company was transferred to Yosemite National Park in 1937. A smaller group remained to establish a Recreational Demonstration Area, which included about 40 structures: a lodge, dining hall and cabins, which was used until the early 1970s as a Boy Scout camp.

Meanwhile, from 1935 to 1941 the Works Progress Administration constructed a new dam which impounded the 14-acre Lake Tranquility as a centerpiece for the Recreational Demonstration Area. All of those properties were donated to the State Park in 1943.

In 1967 the state passed a $43 million bond issue to upgrade and develop state parks. Work which began at Oak Mountain in 1971 includes the golf course, administration buildings, demonstration farm and RV campgrounds, mainly on low elevations and alongside the shore of Double Oak Lake.

Another bond issue, in 2000, provided $104 million for renovation and development in State Parks. President George W. Bush visited the park in June 2001 and spoke about the federal budget. A master plan for the park was completed in 2003 with numerous planned upgrades to all parts of the park.

In 2020 EBSCO proposed transferring the 1,611-acre Belcher Tract adjoining the state park to the Alabama Forever Wild Land Trust. The land trust's board unanimously approved the acquisition in August 2021.

Additional trails for mountain biking have been extended by Birmingham Urban Mountain Pedalers (BUMP) into a world-class challenge course. Other cycling facilities include a BMX course and paved roads popular with racing bike owners.

Four artificial lakes provide areas for fishing, recreational boating, and swimming. Double Oak Lake has a sand beach and a marina for canoes and paddle boats available for rent. The RV camping center is located at the west end of Beaver Lake, which is separated from the higher Lunker Lake by a causeway dam. The park's fishing center is located at the north end of the causeway, near the east entrance from Cahaba Valley Road.

Tranquility Lake (or "Old Lake"), which has a fishing pier and marina, is reserved for guests of the parks improved cabins. The two-bedroom cabins are equipped with central heat and air, bath and kitchenettes.

The park is also the setting for the Oak Mountain Golf Course, an award-winning public course, and has a demonstration farm and several picnic areas.