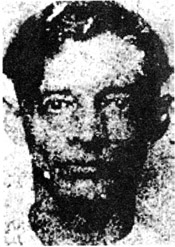 Gusman came to Birmingham in 1907 from Tennessee, where he had worked in the same trade and been widowed. He found jobs and was supplied by Sherwin Williams. He was an active member of the paperhanger's union and participated as a delegate to the Birmingham Trade Council.

He met Ruth while working and boarding at her parents' home on 3rd Avenue North when she was a young teenager. They kept in touch, but had few opportunities for social contact, particularly since Ruth's father, Edwin Stephenson, was a virulent and outspoken critic of the Catholic church and had punished her for showing interest in that faith.

After Ruth turned 19, she wrote to Gusman, accepting his proposal to marry. They planned a secret ceremony, leaving their jobs at lunchtime to apply for a license at the Bessemer courthouse, where they could avoid her father, who spent his days marrying couples at the Jefferson County Courthouse in Birmingham.

The couple intended to be married by Father George Callahan at St Aloysius Catholic Church, but he was unavailable that afternoon. Instead they returned to Birmingham and risked discovery by seeking to exchange vows in front of the altar at St Paul's. Coyle, contacted in Pratt City, returned to his church to preside over the ceremony.

News of his daughter's marriage provoked Edwin Stephenson to murder Coyle on the steps of his rectory later the same day. He claimed to have shot Coyle in self-defense during a fight, and also to have been rendered temporarily insane by the news about his daughter. Stephenson was portrayed by the True Americans and Ku Klux Klan (which both claimed him as a member) as a a hero in the fight against Catholic threats to American morals. They conducted a statewide campaign to raise money for Stephenson's defense. Lead defense attorney Hugo Black won Stephenson's acquittal in part by emphasizing Gusman's dark complexion and curly hair.

During the trial, Birmingham Police chief Thomas Shirley had Gusman arrested after receiving a notice that a certain Pedro Gussman was wanted on suspicion of killing his wife, Pearl, in a hotel room in Peoria, Illinois the previous November. Despite dissimilarities in appearance between him and the Illinois suspect and no evidence that Gusman had left the city during the previous ten years, Shirley held him in jail until Peoria authorities responded negatively to a photograph sent to them.

Gusman and Ruth separated shortly after their marriage, and finally divorced on June 5, 1923. She claimed to have suffered from cruelty in the complaint, which pre-dated no-fault divorces. Gusman married Vera Hancock on May 28, 1930 and moved to 1820 2nd Avenue South.

Gusman was struck by a car at the intersection outside the doors of St Paul's on January 20, 1934. The driver did not stop and was never identified. Gusman died at the hospital from pneumonia while recovering from a broken femur and internal injuries on Valentine's Day. He is buried at Forest Hill Cemetery.