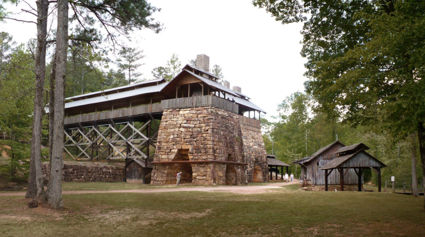 The Tannehill Ironworks in April 2007

The Tannehill Ironworks, also known as the Roupes Valley Iron Company, is a historical iron furnace near Bessemer. One of the first iron making operations in the Birmingham District, the ironworks are an Alabama state historic site and are listed on the National Register of Historic Places.

Tannehill was a major supplier of iron for Confederate ordnance. Remains of the old furnaces are the central attraction of Tannehill Ironworks Historical State Park located 12 miles south of Bessemer off I-59/20 near the southern end of the Appalachian Mountains.

Though some smiths in the area had succeeded in making a brittle iron from local ores, commercial ironmaking in Roupes Valley began when Ralph McGehee and some of the neighboring land owners brought Daniel Hillman from New Jersey to construct and operate a bloomery forge to produce iron from the brown ore in the vicinity.

Hillman, who soon took ownership of the forge, was able to produce 300 pounds of iron per day, much of which was fashioned at the forge into tools and other implements. After Hillman's death in 1831, the forge was operated intermittently. In 1839 it was purchased by plantation owner Ninian Tannehill who expanded the iron-making enterprise. He pursued efforts to improve operations, and hired experienced furnace master Moses Stroup in 1855. Tannehill sold the property to John Alexander in 1857, and Stroup remained in charge of the bloomery.

Stroup began building the first blast furnace at Tannehill around 1858. The 31'-9" high sandstone furnace had a capacity of six tons per day. Stroup built a new cast house and foundry, powered by a water wheel on Roupes Creek. The entire plant was constructed, supplied and operated by slave labor. Some 50 to 60 slaves lived in cabins near the site. Additional laborers were leased from area plantations as the works expanded to meet Confederate demand, perhaps numbering as many as 600 at the height of activity on site.

Shortly after the new furnace was put into blast the property was sold to William L. Sanders in 1862. Stroup, who was already adding two new blast furnaces to the expanding operation, left a few months later to assist in construction of the new Oxmoor Furnace at the request of the Confederate government.

Sanders, a former merchant from Selma, oversaw the completion of the second and third furnaces at Tannehill under an 1863 contract with the Confederate Government. A collapse of the older furnace slowed his efforts, but with an injection of cash from Richmond and the installation of a steam engine to replace the water wheel, the works eventually was able to produced 22 tons of pig iron per day at peak output. Due to the need for frequent repairs and difficulties with transporting the iron, the operation struggled, however, to meet its quarterly quota of 1000 tons. Ingots were hauled by ox-cart to Montevallo where they were loaded onto trains bound for the Confederate Naval Gun Works and Arsenal in Selma. Foundry products such as kettles and eating utensils, were made on site and delivered as needed to Confederate quartermasters. Canteens were also manufactured at a nearby tannery.

The Tannehill works had a significant influence on the later development of the Birmingham iron and steel industry. An experiment conducted at Tannehill in 1862 proved iron ore from Red Mountain (hematite) could successfully be used in Alabama blast furnaces. The test, promoted by South & North Railroad developers, led to the location of government-financed ironworks in the immediate Birmingham area using red ore, specifically the Oxmoor and Irondale Furnaces in Jefferson County.

The Tannehill furnaces and its adjacent foundry were attacked and burnt by three companies of the U.S. 8th Iowa Cavalry on March 31, 1865 during Wilson's Raid. The ruins remain today as among the best preserved 19th century iron furnace sites in the South.

State geologist Walter B. Jones suggested restoring a Tannehill furnace for a run of iron in 1952. This was seriously considered, but it wasn't until the American Revolution Bicentennial was celebrated in 1976, seven years after Tannehill Ironworks Historical State Park was established, that the work to do so was undertaken. The park relined the bosh with fire brick and rebuilt the draft stack, charging bridge, and cast shed around Furnace No. 1 using funds from the State of Alabama, the U.S. Department of the Interior, the American Revolution Bicentennial Administration, the Alabama Historical Commission, and the Birmingham locals of the United Steelworks Union. The Fairfield Works contributed 150 tons of coke, 50 tons of iron ore, and 20 tons of limestone. An industrial blower was contributed by the American Cast Iron Pipe Company (ACIPCO) and safety equipment for over 50 volunteer workers was donated by Abex Corporation.

The volunteers from the Fairfield Works, Woodward Iron Company, Koppers Company, Pullman-Standard, Stubbs Foundry, ACIPCO, and Abex spent two weeks preparing the furnace, which was blown in on September 16. University of Alabama professor emeritus in chemical and metallurgical engineering Ray L. Farabee served as furnace master. On September 19, in front of a crowd estimated at over 15,000, 2.5 tons of pig iron was produced, most of which was cast as replica cannons or souvenir ingots, firedogs, and bookends. Former radio personality and state senator Leland Childs acted as emcee for the event. Featured speakers included Lieutenant Governor Jere Beasley, U.S. Representative Walter Flowers, General Taylor Hardin, and deputy assistant secretary of the Department of the Interior Douglas P. Wheeler. The Smithsonian Institution claimed it was the first time an iron furnace out of commission for over a century had been refired to produce again.

The furnaces, including reconstructed portions, are an American Society for Metals international historic landmark. They have also been designated a Civil War Discovery Trail site. The park attracted over 450,000 visitors in 2006.