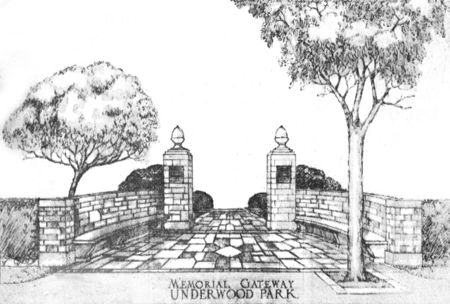 Rendering of the Memorial Gateway added to Underwood Park in 1941

Underwood Park is a 3.2-acre Birmingham city park located near the intersection of 26th Street and 10th Avenue South, near the Red Mountain Expressway overpass and backing up to a St Vincent's Hospital parking deck in Southside.

The first Underwood Park was a 6-acre parcel located south of Clairmont Avenue and across 28th Street South from the Lakeview School. It was named in honor of U.S. Senator Oscar Underwood, and in memory of his granddaughter, Eugenia, who had died that year. The dedication took place immediately following the "Floral Parade" during Semi-Centennial Week, on October 27, 1921. The Senator, along with his wife and his mother, were present at the ceremony which was presided over by Independent Presbyterian Church pastor Henry Edmonds.

Private donors, led by Mrs T. G. Brabston, formed an Underwood Park Association and raised $5000 to purchase materials and equipment for the park. They obtained an agreement from the city to provide a caretaker to supervise and maintain the park. Nat Wilford served in that capacity from 1922 to 1956. Residents protested when the board moved to lay him off in 1932, and again when he was transferred to Memorial Park in South Titusville in 1956, shortly before his retirement.

Later improvement funded by the Association included a picnic shelter designed by Charles McCauley, a flagpole from the Birmingham Ornamental Iron Company, a wading pool, six lights, tennis and basketball courts, walkways, fences and playground equipment. Louis Pizitz provided funds for a drinking fountain, which was dedicated in honor of his granddaughter. In 1934 the Association unveiled plans for a stone gateway at the corner of Clairmont and 28th Street South. The entranceway, designed by W. H. Kessler, was flanked by a pair of benches that curved toward stone piers capped with carved acorns. Two bronze plaques mounted on the piers memorialized Senator Underwood and Eugenia Underwood. The project was not completed until 1941. A pedestrian tunnel was constructed below the street to provide safe passage for school children to use the playground.

Some other improvements were made to Underwood Park in the early 1930s under the auspices of the Civil Works Administration, primarily redressing slopes and trimming trees. In 1949 the Park Board allowed the Foster-Creighton Construction Company, which was engaged in expanding St Vincent's Hospital, to erect storage and office sheds in a corner of the park in exchange for providing 600 yards of fill dirt and topsoil to the park. By the 1950s the park was showing signs of disrepair, with storm drains clogged and plantings and equipment not well-maintained.

After Lakeview School closed in 1981 the property was sold to a private developer. The former pedestrian tunnel was filled in with rubble. St Vincent's Hospital negotiated a property exchange with the City of Birmingham to relocate Underwood Park to its present site. The current hilltop park has a lawn with a walking path around it, a small playground, an asphalt basketball court, and a swimming pool with a bathhouse. At the northwestern end of the park Branko Medenica's "Roly Poly Man", a 30-foot long concrete sculpture, was dedicated in 1976.