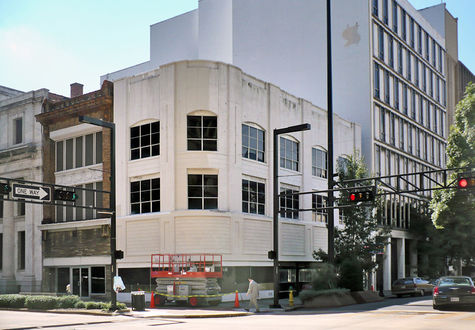 The Webb Building in September 2010

The Webb Building, formerly called the Dude-McCoy Building, built in 1871 on the southwest corner of 20th Street and 2nd Avenue North, was one of the first commercial 3-story buildings in Birmingham. It was developed by John B. Webb of Elyton, who is said to have claimed a $100 prize from the Elyton Land Company for his investment in the new city.

R. H. L. Wharton purchased the "water privilege" for the infant city in 1871 and dug the city's first well at the site of an intermittent spring in front of the Webb Building. He dug other early wells and charged by the bucket for their use. When the Birmingham Water Works was created in 1872 the Birmingham Board of Aldermen ordered the wells capped. From its completion until 1907 the building housed the Dude Saloon.

In 1899 Webb, then residing in Florida, began discussing plans to replace the building with a four-story bachelor's hotel. In the next year he expanded on that plan, saying that he was "figuring on replacing the present building with a five-story structure to be used as a stag hotel." That project was never carried out. The building has been remodeled several times. The present stone cladding was added during a renovation in 1915.

The building was owned for many years by SouthTrust Bank, which operated a banking branch and office encircling the back of the older structure. It was sold to George Ladd along with the rest of the half-block when the branch was closed.

After the building became vacant, part of the metal cladding above the storefront on the ground floor peeled away, exposing the original brick. In 2010 Ladd hired architect Pete Pritchard to oversee repairs and renovations as part of his efforts to attract a tenant. The work carried out did not match the designs presented to the Birmingham Design Review Committee, leading to some controversy. The board later approved a compromise design prepared by Herrington Architects. Those efforts did not result in a reutilization of the space.

In 2019 Ladd Real Estate secured Historic Renovation Tax Credits to preserve Webb Building and the adjoining three-story building at 120 20th Street North. In May 2020 he returned to the Design Review Committee with a project that included ground level retail in both buildings, and proposed to demolish the former Pete's Famous Hot Dogs space at 125½ 2nd Avenue North, between the Webb Building and the 1963 BTNB building, as an entrance courtyard for six apartments above.