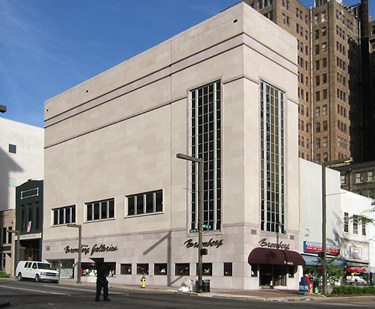 The Bromberg's building is the corporate headquarters for the Bromberg's chain of jewelry stores, which was founded in Mobile in 1836 and has been operating in Birmingham since 1900. The five-story modern-style structure is located at 123 20th Street, on the southeast corner of the intersection with 2nd Avenue North.

The store, then known as "Bromberg & Co." relocated from 218 20th Street North after World War II, taking the space left by the destruction of the Drennen Department Store in a 1943 fire. It was one of the first steel framed building to be completed after wartime rationing rules were relaxed. Bromberg's hired Miller, Martin & Lewis as architects of record while J. Gordon Carr, the architect of Tiffany's 5th Avenue flagship store, designed the interiors. Birmingham's Brice Building Company was the general contractor.

The building is clad with rose-colored terrazzo at the base and limestone above. The facade features large multi-story windows at the center of the narrow front facade and at the front end of the 2nd Avenue facade. The windows are framed with terrazzo surrounds which intersect a narrow horizontal band. A wider band above the windows also wraps around the corner.

The ground level features several deep display windows and a recessed entryway on the 20th Street side. The ground floor was originally a showroom for jewelry, silver, cameras, furniture and appliances while the upper floors stocked china, crystal, gifts, artworks and collector pieces.

The store's grand re-opening was held on July 22, 1946. As the chain expanded into suburban markets in the 1960s and 80s, the Bromberg's building remained its flagship store. Decreasing sales, though, eventually led the company to cease retail operations in the building on March 6, 2009. It continues to rotate the window displays and maintains offices in the upper floors. In 2010 it began renting out the second-floor space for selected events such as wine tastings and wedding receptions.