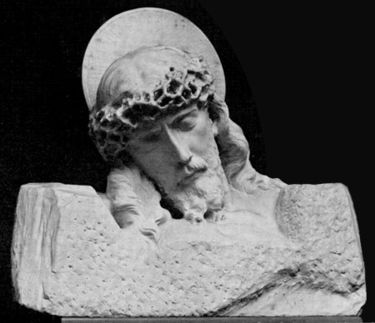 Head of Christ by Giuseppe Moretti

The Head of Christ is a marble sculpture created in 1903 by Giuseppe Moretti from a block of Sylacauga marble. It depicts the languid head of Christ, life-sized, with his eyes closed and a tear on his cheek, apparently at his death on the cross.

The sculptor selected the marble during one of his first visits to Sylacauga, proclaiming it "a block of perfect stone" and comparing it to the famed Carrera marble quarried in Italty. He chose the subject of Christ's perfect sacrifice as analogous to the carving of a perfect stone to produce art. He completed the piece in Birmingham and lent it for display alongside his colossal Vulcan at the 1904 Louisiana Purchase Exposition in St Louis, Missouri.

Together the two figural sculptures in Birmingham's exhibit in the Palace of Mines and Metallurgy, represented the range of mineral resources available for commercial exploitation in the Birmingham District. Moretti told his assistant, Geneva Mercer, that while Vulcan represented the heavy material industries, the Head of Christ could represent the state's spiritual resources. The marble sculpture won a silver medal at the fair. At one point, Moretti expressed grander plans for a marble counterpoint to Vulcan, proposing a colossal marble "Venus" to grace the city.

Moretti kept the Head of Christ in his possession throughout his life. He used it to show others the possibilities of Alabama marble, a resource that he had invested his own money into and was interested in promoting to artists and architects wherever he went. He told his friend, Alice Jeffress Boswell, that "I have a peculiar affection for it. Where I go, my Christ goes also… I feel that the final resting place of this first sculpture from Alabama marble should be in that state." Boswell told The Birmingham News that Moretti hoped to deposit the piece at the Birmingham Public Library or some other institution in Birmingham.

Moretti died in 1935 just as plans were beginning to take shape to move the Vulcan statue from the Alabama State Fairgrounds to a new stone tower on Red Mountain. He left the Head of Christ, along with his other possessions, to his widow, Dorothea. She offered to lend the piece to Birmingham to display during the rededication of Vulcan in 1939. The Italian-American Progressive Association speculated that if they installed a plaque honoring Moretti at the top of the stair's in Vulcan's tower, that Mrs Moretti would eventually offer the Head of Christ to them to keep on permanent display in the exhibit hall at the tower's base. A contemporary newspaper article alluded to a supposed claim of Moretti's that the two works were companions and should remain together. In the author's interpretation, Vulcan's crass commercialism required the mollifying influence of the depiction of Christ's humility and sacrifice. As Diane McWhorter related the story, "city officials decided there was no room on the hilltop for Jesus." Mrs Moretti became distressed at the fabrications and apparent covetousness. She reiterated that her offer was for a temporary loan, only. In the end, the Birmingham City Commission declined the offer on the grounds that they could not guarantee the security of the artwork amid the throngs of visitors expected for the dedication.

Dorothea Moretti, in consultation with her husband's former assistant, Geneva Mercer, donated the piece to the Alabama Department of Archives and History. It was placed on display in the Fine Arts Room of the archive's World War Memorial Building in Montgomery. She considered the repository particularly fitting since it was constructed with Alabama marble, the discovery and commercialization of which was owing in part to Moretti's efforts. She wrote, "It is precisely as the Pioneer of the Alabama Marble that Moretti is commemorated in the Archives and History of the state. It is precisely in order that future generations will know—when they see those magnificent columns—that the artist Moretti was the first moving force that in his phrase 'Brought that beautiful marble to light'."

In 2004, during the renovation of Vulcan Park, then Jefferson County Commission president Larry Langford referred to the story that Moretti insisted the two artworks remain together, which had been reprinted in Alabama Heritage. A few months later the magazine followed up with another article debunking the story.

Vulcan Park Foundation director Katherine Billmeier explained that the park's mission did not extend to the display of Moretti's other artwork and that the board's plans for a new visitor's center would not accommodate the Head of Christ. The Foundation did accept the gift, several years later, of a small marble bas-relief that had been given to James MacKnight by Moretti.

A small bronze copy of the Head of Christ, also by Moretti, was given to the Birmingham Museum of Art by Geneva Mercer in 1982.