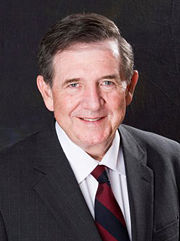 Carns is a graduate of Woodlawn High School. He earned his Bachelor's degree in Engineering from the University of Alabama in 1962. From 1993 to 2004 he owned American Metal Technology, a stainless steel tube manufacturing plant in Pell City. He resides in Mountain Brook. He and his wife, Judy, have three adult children (Christa, Jase and Matt) and five grandchildren. He is a member and Elder at Briarwood Presbyterian Church.

Carns served four terms from 1990 to 2006 in the Alabama House of Representatives, representing District 48. He was the House minority leader and served as co-chairman of the Jefferson County Legislative Delegation.

In the legislature, Carns earned high grades from the Eagle Forum, the Christian Coalition, the Business Council of Alabama and the National Rifle Association. In 1996, he headed up Governor Fob James's Welfare Reform Commission. In 2003, he sponsored the Voter ID Act.

In 2006, Carns put his name on the ballot to challenge Gary White in the Republican primary for Jefferson County Commission District 5. He easily defeated White and faced no opposition in the general election. He was sworn in to his commission seat on Tuesday, November 14, 2006.

The major issue facing the Commission during his tenure was the Jefferson County debt crisis. He and fellow commissioner Bobby Humphryes argued against a majority headed by Commission President Bettye Fine Collins that bankruptcy was the best course for the county. In 2010 he announced that he would not seek a second term. Carns was re-elected to the Alabama House in 2011 after winning a special election to replace Greg Canfield who had been appointed Alabama Devlopment Office Director by Governor Robert Bentley.