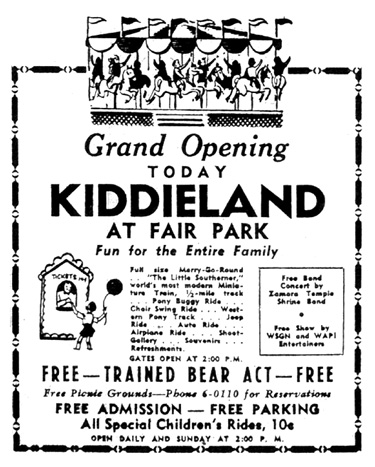 Kiddieland (or Kiddieland Park) was a small amusement park which operated at the Alabama State Fairgrounds from 1948 to the mid 1980s.

The park was planned by the Alabama State Fair Authority, newly reorganized under the ownership of the City of Birmingham, as an effort to combat juvenile delinquency. It was aimed at primarily at younger children and was seen as the successor to the East Lake Amusement Park, which closed during the Great Depression. Birmingham News city editor Vincent Townsend chaired the subcommittee responsible for developing the attraction. Walling Keith managed the park for the authority.

WSGN-AM and the News sponsored a weekly contest during the first summer, inviting kids to send short essays to Miss Ann, who read comic strips over the air, describing which character they'd like to bring to the park. The winning boy and girl would be crowned King and Queen of Kiddieland and have their pictures in the newspaper. The park's bandstand featured "hillbilly shows" and concerts on Sundays. The entertainments were broadcast live on WSGN. Admission and parking were free, with most rides costing 9¢ for children and 10-20¢ for adults. Free rides were given to "underprivileged groups" during special events sponsored by the park and local civic clubs. 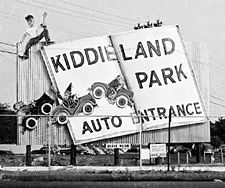 Many of the park's thrill rides were supplied by the National Amusement Device Company (NAD) of Dayton, Ohio. William L'Horbe, Jr and Charles Paige from NAD provided design and consulting for the park's development. The park and each ride within it boasted a neon-lit entrance arch created by Dixie Neon for $10,000.

Previously open only to white patrons, Kiddieland was closed on January 1, 1962, along with all of Birmingham's city parks, in defiance of a court order to end segregation. The parks were reopened to all comers by the newly-installed Birmingham City Council in July 1963.

After the majority of the original rides were dismantled, the site continued to be used for traveling carnivals, such as Spring Fling and Fall Carnival, which were subsidized by the city of Birmingham.

The "Little Southerner" miniature train was a replica of "The Southerner" streamliner which stopped in Birmingham on its route between New Orleans, Louisiana and New York, New York.