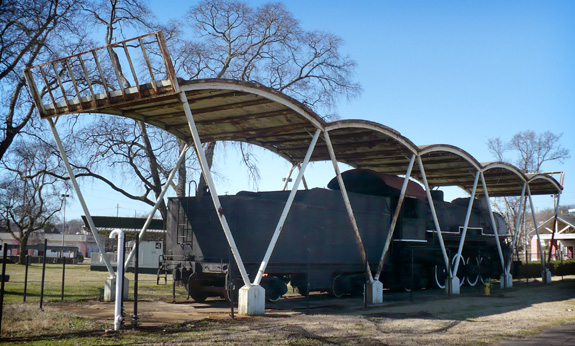 Engine No. 4018 is a class USRA Light 2-8-2 "Mikado" steam locomotive which operated for three decades hauling freight between Bessemer and Birmingham on the St Louis and San Francisco Railway. It is one of only a few locomotives of its type that survive. The engine was placed on display at the Alabama State Fairgrounds in 1952 and moved in 2009 to Sloss Furnaces.

Called a "war baby" because it was part of the build-up of cargo capacity ordered through the United States Railroad Administration during World War I, Engine No. 4018 was constructed in October 1919 to a standardized USRA design by the Lima Locomotive Works of Lima, Ohio for the Pennsylvania Railroad Company (order no. 20030).

The coal-fired standard-gauge locomotive was capable of 54,700 foot-pounds of tractive effort, running two 27" x 30" cylinders under 200 pounds per square inch of boiler pressure. The 2-8-2 designation refers to the arrangement of four driving axles (8 wheels) positioned between non-powered leading and trailing axles. The Mikado's driving wheels are 63 inches in diameter and its wheelbase is just over thirty-six feet. The overall length of the engine and its 10,000-gallon tender is just under eighty-two feet. The locomotive stands nineteen feet tall.

Engine No. 4018 was sold to the St Louis and San Francisco Railway in 1923 and spent much of the next three decades carrying transport between Bessemer and Birmingham. Steam engines were phased out in favor of diesel locomotives in the post-war period and No. 4018 was, in fact, the last steam locomotive to operate a "revenue run" on any part of the Frisco Railway.

At the request of then-Birmingham mayor Jimmy Morgan, the locomotive was saved from the scrap-yard and given an overhaul before making its final five-mile run to Birmingham on February 29, 1952. Engineer Rufus Smith operated the engine with C. H. Stuteville as conductor, R. S. Blackburn and H. J. Parrish as brakemen, and Eli Wilson as fireman. A. M. Ball, assistant to Clark Hungerford, the President of the Frisco line, was in attendance for the occasion.

It was formally donated to the city on May 29 of that year. It traveled under compressed-air power on Atlantic Coast Line Railroad trackage to the vicinity of the fairgrounds. From there a special spur was constructed of panel track to deliver it to the selected spot near the Kiddieland amusement park. Despite one derailment, the locomotive was brought safely to its new home and a metal shed was built over it. Frisco employees were regularly sent over in the ensuing years to keep the engine in good condition.

As Kiddieland and Fair Park deteriorated in the 1970s, a proposal was made by the Heart of Dixie Railroad Museum to take possession of and restore the locomotive under a 20-year lease. The plan was abandoned by the museum's board. An offshoot group, Birmingham Railroad Heritage, began negotiations with the city to restore the locomotive for possible use on steam excursions. Those talks broke down with Birmingham unwilling to have the locomotive moved away from the city. As the feasibility of operating mainline steam excursions diminished, interest in moving the engine waned.

In the late 1980s a cosmetic restoration was begun by a group of area railroad enthusiasts volunteering their labor. The bell and headlight were removed for safe-keeping during the work, which involved sheet-metal patches over rusted areas and repainting. A new front coupler knuckle was donated and installed. The effort ran out of steam, however, and was never completed - partly for lack of security at the site. The bell and headlight remain in the possession of Chris E. Howard. 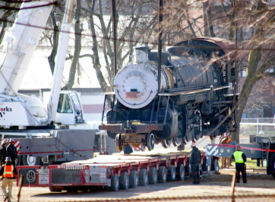 Hoisting the engine onto a multi-wheel trailer at Fair Park. February 19, 2009. Photo by Donnie Strickland

As the city of Birmingham planned a major redevelopment of Fair Park, Mountain Brook mayor Terry Oden headed efforts to plan its move to Sloss Furnaces National Historic Landmark and to raise the estimated $150,000 that was needed to accomplish it.

Historic Machinery Services Corporation of Steele coordinated the move, which began on February 19, 2009 and was completed on February 21. The operation required lifting the 330,000-pound engine by crane onto a multi-wheel crawler trailer which moved it two blocks to the CSX railway siding at Fayette Avenue. It was then lifted onto a TTX 8-axle depressed center flatcar for the trip to Sloss. The city of Birmingham and CraneWorks contributed toward the operation. The engine was cleaned and repainted in early 2011.

A similar locomotive, No. 4003, located in Fort Smith, Arkansas has been nominated to the National Register of Historic Places [1].