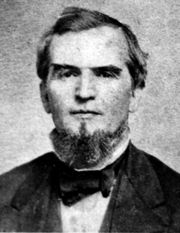 James Withers Sloss (born April 7, 1820 in Limestone County; died May 4, 1890 in Birmingham) was a planter, industrialist, and the founder of Sloss Furnaces, and a leading figure in the early development of Birmingham.

Sloss was born to Joseph and Clarissa (Wasson) Sloss near Mooresville in Limestone County. Though he had little formal education, he apprenticed as a bookkeeper at a butcher's shop and, in 1842 bought his own general store in Athens and married Mary Bigger. He was successful and expanded his homestead into a successful plantation and soon became one of the richest men in the state. During the Civil War he served in the Confederate Army and in 1867 was made president of the Nashville & Decatur Railroad, which later merged into the Louisville & Nashville Railroad system.

After the war Sloss, who had been given the title, "Colonel", became a leading figure in encouraging Alabama's industrial development. In 1871 he persuaded the L&N to extend its line to the newly-founded city of Birmingham. The railroad invested heavily in its Alabama operations and helped transform the infant city of Birmingham into what soon was labeled the Magic City for its miraculous growth. In 1876 he and James Thomas leased the Oxmoor Furnace and he also joined the Eureka Mining and Transportation Company with the aim of producing coke pig iron in Birmingham.

In 1878 Sloss, along with Henry DeBardeleben and Truman Aldrich, formed the Pratt Coal and Coke Company which later became the largest mining operation in the Birmingham District. Through the work of the company, Sloss became the first person to show that iron could be made in Birmingham purely from Alabama's iron ore, coke, and limestone. With capital from DeBardeleben, Sloss founded the Sloss Furnace Company in 1881 and began erecting the "City Furnace", now known as Sloss Furnaces. That November a local newspaper suggested that Sloss run for Governor of Alabama, proclaiming him "the very personification of Christian manhood and integrity, possessing the qualifications of head and heart which we should emulate."

Sloss retired from his company just four years later, selling the company to a John Johnston and Joseph Johnston (not related) and a group of investors who expanded and reorganized in 1899 as the Sloss-Sheffield Steel and Iron Company. Sloss later served as president of the Birmingham Water Works.

Sloss produced twelve children with Mary and his second wife Mattie. He died in 1890 and is buried in Birmingham's Oak Hill Cemetery.