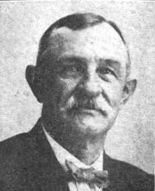 Truman Heminway Aldrich (born October 17, 1848 in Palmyra, New York, died April 28, 1932 in Birmingham) was a civil engineer, a mining company executive, and briefly served in the United States House of Representatives and as Postmaster of Birmingham.

Aldrich suffered from poor health as a young boy. He attended public schools and a military academy at Westchester, Pennsylvania before enrolling at the Rensselaer Polytechnic Institute in Troy, New York. He graduated in 1869 with a degree in mining and civil engineering and took a job with the railroads in New York and New Jersey. In 1870 he married Anna Morrison of Newark.

In 1872, Aldrich became a partner with his brother-in-law and Colonel Cornelius Cadle in a banking enterprise in Selma, Alabama. While in the region he investigated the existing coal-mining operations at Montevallo and around the Cahaba coalfield. The next year he secured a lease on the Montevallo coal mines and set to work extracting coal that summer.

At the time, coal-mining was primarily a seasonal activity to supplement the market for heating coal in the winter. Aldrich's miners worked all summer and piled the coal in the fields near the entrance, and when winter came he was able to supply a much larger market than any other operator in the area. He purchased the mines outright in 1875 and named the surrounding settlement Aldrich, leasing the operation to his younger brother William while he prospected for new seams.

Aldrich and his assistant Joseph Squire located the Jefferson and Black Creek coal seams in the Warrior coalfield. He subsequently incorporated the Jefferson Coal Company in the town of Morris along with Marshall Morris and S. D. Holt. It was coal from this mine that fueled the first successful experiment with making pig iron with a coke-fired furnace at the Oxmoor Furnace on February 28, 1876.

Aldrich joined with Henry DeBardeleben and James W. Sloss to develop the Warrior coalfield. Together they formed the Pratt Coal and Coke Company, which he served as superintendent and mine manager. The first coking coal from the Pratt mines was carried by railroad into Birmingham in 1879, helping establish the serious commercial potential for iron and steel production in the Birmingham District.

In 1881 Aldrich resigned from Pratt to found the Cahaba Coal Company in Bibb County. The company was incorporated by the Aldrich Brothers, Cadle, and Charles Turner with initial capital of $1 million, divided into 10,000 shares at $100 each.

The first task for the new company was the provision of an 8.2 mile railroad connector, which was completed in the Winter of 1883. The company laid out a "model community" on the bank of Caffee Creek. It was first named "Gresham" by Cadle, who served as vice-president and postmaster. He chose the name to honor a Union general he had served under at Vicksburg. After seeing a "ton block" of coal brought from the mine, Aldrich renamed the town Blocton in 1884 or 1885.

In 1885 Aldrich also joined with William Berney, Robert Jemison Sr, L. D. Aylett and Joseph McLester to create the Berney National Bank. The following year he was one of the partners of the Leeds Land Company the founded the city of Leeds. In addition to serving as president of the Cahaba Coal Company and on the boards of his other ventures, Aldrich collected fossils and published the first Alabama State Bulletin with nine plates of illustrations of tertiary fossils he had recorded. Aldrich also supplied information on the coal fields he had surveyed to John Witherspoon Dubose and to the Squire's "Report on the Cahaba Coal Field" published by the Geological Survey of Alabama in 1890.

Blocton coal earned a reputation as an efficient fuel for steam locomotives and the company banked nearly $55,000 profit on production of 135,010 tons of coal for the fiscal year ending on March 31, 1887. In 1888 the company opened four new mines, bringing the total to 6 and constructed hundreds of coking ovens. The growth of the company compelled Aldrich to advertise for miners who arrived from all over the United States, as well as Western and Central Europe. A strike in October of that year was defeated by supplying coal to customers from other mines. By the summer of 1890 over 3,600 people were residents of Blocton and products from the companies mines and overs was being sold to customers throughout the Southeast and parts of Latin America.

In 1890 Aldrich faced another strike, initiated by the United Mine Workers of America. He defeated this strike by hiring, for the first time, African Americans to operate the mine. In 1892 Aldrich sold the combined Cahaba and Excelsior Coal Company to Tennessee Coal, Iron and Railroad Company. Aldrich became a second vice-president and general manager for TCI. As an executive of that company he secured investments that helped TCI survive the depression of 1893, including a contribution of grain and flour from B. B. Comer. He moved his residence from Blocton to Birmingham. His residence was on the 700 block of 17th Street South.

In 1894 Aldrich resigned from mining and manufacturing to pursue a political career. He secured a nomination to the 54th U. S. Congress and served for less than a year before being recalled by a contest to his election. He sold his house to move to Washington D.C. and stayed in the Morris Hotel when in Birmingham.

In 1896 he returned to the coal business as president of the Cahaba Southern Mining Company which operated mines at Hargrove in Bibb County. He moved back to Birmingham, residing at 930 20th Street South, and moving, in 1898 to Highland Avenue near St Mary's-on-the-Highlands Episcopal Church. In 1899 be became a vice-president of the Birmingham Machinery and Foundry Company and, two years later, was named the acting president of the Sloss-Sheffield Steel & Iron Company. He helped launch the East Birmingham Land Company and opened the Virginia mines, which was the site of a tragic explosion in 1905 that killed over 100 miners.

In 1902 Aldrich joined his son in a prospecting venture in Tallapoosa County called the Hillabee Gold Company. In 1905 he bought the Montevallo Mining Company back and served until 1910 as its president. In 1911 President Taft appointed him Postmaster of Birmingham. He moved his residence to Jemison's new Glen Iris development. His continued research into the area's paleontology earned him wide esteem and he was awarded an honorary doctorate by the University of Alabama, which received his collection of over 20,000 fossil specimens at the State Museum of Natural History.

Aldrich died in 1932 at the age of 83. He is buried at Elmwood Cemetery. In addition to the town of Aldrich, Truman Aldrich Parkway in West Blocton preserves his name.