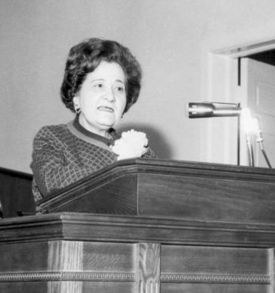 Nina Miglionico speaks to a Zeta Phi Beta gathering in an undated photograph from the Birmingham World. courtesy BPL Archives

Nina Miglionico (born September 14, 1913 in Birmingham; died May 6, 2009 in Birmingham) was a pioneering lawyer and politician, the first woman elected to serve the City of Birmingham, which she did for 22 years in the City Council, with a four-year stint as Council President. She continued to serve the city as a civic leader until her death.

Miglionico's political career was marked by conviction and remarkable courage as she promoted a vision of the city that was actively opposed by violent members of the community during the city's painful emergence from segregation.

Nina was the daughter of Joseph Marion and Marianna Miglionico. She grew up in Avondale and attended Woodlawn High School, where she contributed pen and ink drawings to the Woodlog yearbook. After graduating in 1930, she went on to enroll at Howard College, then transferred to the University of Alabama School of Law, where she completed her professional degree in 1936. Failing to get an offer from an established firm, she opened her own practice. She is thought to be the he first woman in Alabama to have established her own firm.

In 1958 she took up the presidency of the National Association of Women Lawyers, and, soon later, was appointed by President Kennedy to serve on the Presidential Commission on the Status of Women. That year she entered a race for a seat on the state legislature, but dropped out before the election.

In 1963 she ran for a seat on the newly-established Birmingham City Council. She earned a place in the run-off ballot and campaigned against organized opposition from the Ku Klux Klan and White Citizens Council who faulted her support for integration and reconciliation and vilified her Catholicism and Italian ethnicity. She won the seat, however, and became the first woman elected to the city's government. 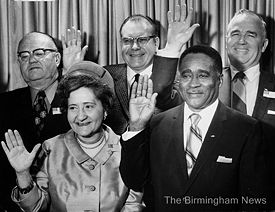 Miglionico and other members of the City Council deliver the oath of office in November 1969.

In the spring of 1965, shortly before her re-election to a second term, Miglionico's father discovered a bomb consisting of 38 sticks of dynamite on the front porch of their home on Essex Road. Undaunted, she continued to serve the city through a total of six terms on the council, earning loyal supporters while remaining a target of extremists. As late as 1974 her front yard was defaced by burning crosses.

That same year she ran as a Democratic candidate for U. S. Congress, failing to defeat incumbent Republican John Buchanan Jr. She returned to the practice of law in partnership with Samuel Rumore Jr.

From 1978 to 1981 Miglionico presided over the City Council and remained in office until 1985, when she retired from electoral politics.

In 1979, Miglionico was appointed by Governor Fob James to a 16-member working party that drafted a proposed state constitution that was approved by the state legislature in 1983. The Alabama Supreme Court, however, ruled that the idea of replacing the entire 1901 constitution by amendment was itself unconstitutional.

In 1985, while president of the Birmingham Park and Recreation Board she supported the idea of letting another city build a new stadium for the Birmingham Barons rather than have Birmingham continue to fund amenities that serve the entire region.

In June 1999, a resolution to dedicate the city's Birmingham Central Station on Morris Avenue as "Nina Station" in recognition of her achievements was submitted and withdrawn without a vote.

In July 2006, fellow former Councilor John Katopodis proposed renaming Caldwell Park for her. The Park and Recreation Board told Katapodis that only the City Council has the authority to rename the park. Seeking to dispel the dispute over Caldwell Park, the then-Jefferson County Commission President Larry Langford proposed honoring Miglionico by naming a newly proposed literacy center for her.

She was inducted into the Birmingham Gallery of Distinguished Citizens in 2008. In April 2009 the City Council approved a proposal to name the Birmingham Intermodal Facility for her. Miglionico died at Trinity Medical Center after suffering a fall at her home. She is buried at Elmwood Cemetery.

A statue of Miglionico was dedicated in Linn Park on October 23, 2015.