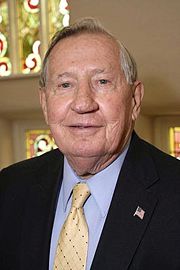 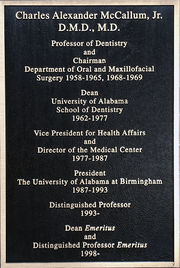 Charles Alexander "Scotty" McCallum Jr (born 1925 in North Adams, Massachusetts; died January 16, 2021) was a dentist, educator, and the former President of University of Alabama at Birmingham. He was also a 2-term mayor of Vestavia Hills.

McCallum attended Dartmouth College in Hanover, New Hampshire, and served with the U.S. Navy during World War II. He then completed dental school at Tufts College in Medford, Massachusetts in 1951 and enrolled at the Medical College of Alabama in 1953, completing his M.D. in 1957. He served his residency at the University of Alabama School of Medicine in Birmingham, McCallum began teaching in 1956 and joined the faculty in 1958. He was made a full professor of dentistry in 1958 and was appointed dean of the UAB School of Dentistry in 1962. In 1968 he began serving as chair of the UAB Department of Oral and Maxillofacial Surgery.

In 1977 McCallum was named Vice President for Health Affairs and director of the UAB Medical Center. In 1987 he was tapped to succeed S. Richardson Hill as President of the University. After seven years he retired and was succeeded by Claude Bennett in 1993. He remained on the faculty as a distinguished professor.

Outside the university, McCallum served as president and CEO of the Alabama Symphony Association, chairman of the Metropolitan Development Board until 1999 and general campaign chairman of the United Way of Central Alabama. He also is an alumnus of Leadership Birmingham.

In August 2000, McCallum was urged to run for Mayor by a group opposing the then-current leaders of Vestavia Hills. He defeated 3-term incumbent C. Pat Reynolds in the 2000 Vestavia Hills municipal election. While in office, McCallum sought to bring more businesses into the city and oversaw the city's involvement in the $45 million redevelopment of the Vestavia Hills City Center. He pushed for the city's annexation of Cahaba Heights in 2002, a move which connected the original city to the annexed Liberty Park, which at the time was 2 miles away from the contiguous city limits. He also promoted the protection of green spaces in the city for watershed conservation and recreation. McCallum retired after two terms. Long-time Vestavia Fire Department chief Butch Zaragoza was elected as his successor. McCallum is married to Alice Lasseter McCallum. They have four grown sons.

In 1988 the "Friends of Tinsley Harrison" commissioned a bust of McCallum by sculptor Cordray Parker which was installed outside the Basic Science Education and Research Building. On December 12, 1996 that building was renamed the McCallum Basic Health Sciences Building in honor of his service to UAB. In 2006 a life-size Scotty McCallum statue by sculptor Ira Chaffin was installed at the UAB Mini Park.