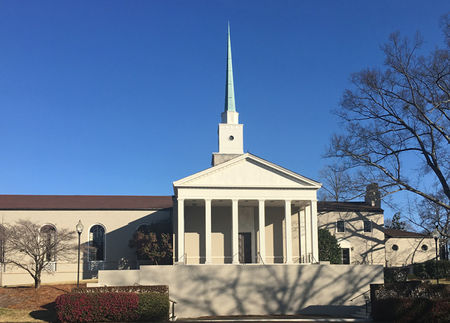 The 1st Church of Christ, Scientist is a congregation of the "Mother Church" of Christian Scientists, founded by Mary Baker Eddy in Boston, Massachusetts in 1879. The Birmingham branch church is located at 209 Oxmoor Circle in Homewood. Susan Clayton is pastor. Weekly Sunday services are broadcast on WAPI-AM.

The Birmingham congregation dates to the establishment of a "Christian Scientists' Room" in downtown Birmingham in the 1890s. Etter Haden Foster joined Lewis and Ides Johnson, fellow students of Atlanta's Sue Harper Mims, and chartered a church, which met at the Johnson's home, on November 21, 1899. Over the next decade the growing congregation moved to a hall on 21st Street North, to the McGowan Building on 3rd Avenue North, and to the Massey Building, also on 3rd Avenue. In November 1907 the church moved into the Five Points Chapel next door to Five Points Methodist Church. They later purchased the lot next door and constructed their own 7,000 square foot building at 2031 11th Avenue South, which served their needs until 1949.

That year the membership purchased two undeveloped lots at 3116 Highland Avenue and constructed a new large church, completed in 1950. In 2011 the congregation, which averaged 100 attendees at weekly services, elected to sell its Highland Avenue property to the adjoining Independent Presbyterian Church and look to purchase or construct a smaller meeting house. They subsequently moved into a commercial storefront at 209 Oxmoor Circle in Homewood as they continued to plan for the future.