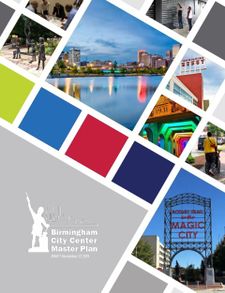 Planner Craig Lewis explained the importance of the city center as "everyone's living room," and stated that its development should reflect, "the highest ideals of the city." Among those ideals are an essential commitment to equity. The plan states that, "[i]nvestments made in the City Center should benefit everyone in the city and people of all backgrounds should be able to live and find opportunities here that facilitate economic mobility."

Stantec led a series of four meetings with the public, as well as interviews with 120 specific stakeholders, and with focus groups during the development of the City Center Master Plan. A public survey was also conducted through the project website, garnering 1,118 responses.

The plan was structured around 6 "Guiding Principles":

The plan laid out 16 "Priority Initiatives":

The City Center Master Plan included a range of specific "Operations and Management Strategies" which would be helpful in implementing the goals and principles of the plan. These included: