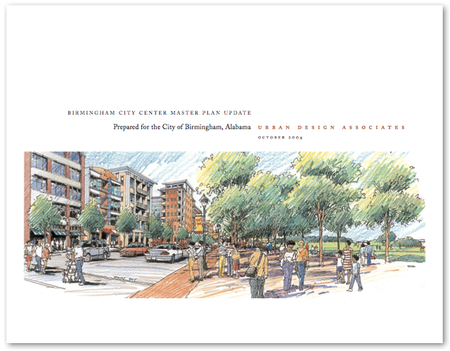 The process was guided by a 33-member steering committee appointed by Mayor Bernard Kincaid. A commercial and residential market study was commissioned first to project demand for new development in various sectors which would need to be accommodated by the plan. Meanwhile UDA's planning team performed their own planning analysis of historical and current conditions. They held focus group meetings with various stakeholder groups in January. A community design charette in March culminated in a public design concept presentation at the Carver Theater. A draft report was then prepared and circulated to the steering committee in June and, after revisions, submitted to the city in a public presentation at the Alabama Theatre on October 20, 2004.

The 2004 Master Plan update calls for concentrating public resources into the development of four signature districts ("Initiative Areas") in the City Center, the Civil Rights District, a "Technology and Cultural District", a "Loft/Design District", and the Civic Center District. The plan also identifies a few places ("Enhancement Areas") which are already strengths, but which need ongoing public investment to remain healthy. These are Birmingham Green, UAB/Medical Center, 5 Points South, Lakeview, and the Park Place Hope VI community.

The plan also recommends creating attachments from downtown to an "open space framework" that connects greenways on a regional scale. The proposed Railroad Reservation Park, for example, should be extended as a greenway to the east and west, connecting to similar projects at Valley Creek, Village Creek, Ruffner Mountain, and East Lake. Other connections could be made to a parallel greenway at Red Mountain connecting Red Mountain Park, Vulcan Park, and Highland Avenue/Clairmont Avenue.

Another component of the framework is the creation of "green streets" in the city center which improve pedestrian access and aesthetic appeal along certain key corridors. Part of the plan recommends converting 7 of downtown's 13 one-way streets (many of which date to 1973) to two-way traffic as part of the process. Transit corridors and parking strategies are also discussed in anticipation of more detailed plans for those elements.

The Master Plan goals for the Civil Rights District include a proposed residential/mixed use development north of 4th Avenue. The proposed design places more intensive office and commercial uses closer to Kelly Ingram Park with medium-density residential development northward. Parking is indicated on the interior of blocks with buildings fronting on sidewalks. Small neighborhood parks would be created along 8th Avenue North at 13th and 15th Streets, providing links in a proposed "green street", a pedestrian-friendly corridor connecting the new Birmingham Social Security Administration Center to the municipal complex at Linn Park. 6th Avenue North and 14th Street would have a similar treatment, creating walkable connections to the Central Business District and Railroad Reservation Park, respectively.

This district is one of two that are envisioned as spanning across the Railroad Reservation, requiring new linkages across that barrier which are part of the program of the Railroad Reservation Park, and use existing connections at 14th Street and 18th Street. The Technology & Cultural District, as planned, envisions an expansion of research, biotechnology and medical facilities northward from UAB's campus toward the Innovation Depot, and an intensification of cultural uses in the present Theater District, centered on 2nd Avenue North. The district is envisioned as supporting high-density residential, office, commercial and institutional uses.

The Loft District is the second district that spans the Railroad Reservation, with a primary connection to be created with "green streets" at 20th Street and 23rd Street. The future of this district is seen mainly as a continuation of current redevelopment projects with new construction of the same scale and character, growing southward as the market expands.

The area surrounding the Birmingham-Jefferson Civic Center and the I-20/59 downtown viaduct was given special attention in this part of the plan. The primary use of this area was envisioned as tourism and events. The plan proposed creating a below-grade corridor for the interstate, paralleled by surface boulevards with simplified access and egress in the downtown area. Wide plaza-like pedestrian bridges could then span the highway, providing a more pleasant urban space connecting the BJCC to the Birmingham Museum of Art, Boutwell Auditorium, Linn Park and the Central Business District.

The plan exists only as a guide or strategy for utilizing public investment and policy toward achievement of positive benefits. It carries no intrinsic weight except as a shared vision. The plan document provides suggestions for planning guidelines, zoning changes, further studies and detailed plans, design guidelines, potential partnerships and opportunities which need further action.

The plan itself recommends the creation of a Downtown Development Authority to pursue implementation. A first step toward this establishment would be the coordination of existing agencies and private developers to communicate the vision elaborated in the master plan and to insure that independent projects complement each other and the city's goals. Since no such authority has yet been created, responsibility for pursuing these projects has fallen to City Hall and Operation New Birmingham.

The commissioned plan was formally accepted by the city at the October 20 presentation, but not adopted in any legal sense. Proposed zoning changes that would formalize some of the planning intentions and lift barriers toward implementation were drafted in 2006.

The Civic Center interstate-lowering project was the subject of a preliminary traffic study performed by Parsons Brinckerhoff of Atlanta, Georgia. A request for $2 million in funding for additional studies was made to the state's legislative delegation. The Alabama Department of Transportation deemed the proposal unfeasible and made plans to simply replace the bridge decks on the I-20/59 downtown viaduct. Through discussion with city officials and others, that plan was expanded into a larger project to replace the viaduct with a taller pre-cast concrete bridge. Work on that section began in early 2019.

On August 20, 2007 the City Council's Budget & Finance Committee approved $16,000 toward a proposed traffic study that would determine the feasibility of adopting UDA's recommendations for converting one-way streets to two-way traffic, but the proposal died in the Council. It was brought up again and approved in July 2008. The Regional Planning Commission pledged $64,000 in federal grant money for the $80,000 study, which was conducted by Gonzalez-Strength and Associates. A presentation of the study made on May 19, 2009 indicated that the conversion would not negatively impact traffic congestion and may allow for more parking spaces and/or bicycle lanes on some streets. No announcements were made until January 2019 when the city announced that the sections of Richard Arrington Jr Boulevard North and 22nd Street North between Abraham Woods Boulevard and the BJCC would be converted to two-way traffic. The change was scheduled to coincide with the replacement of the I-20/59 downtown viaduct.

Repaving and landscape improvements to the 14th Street corridor began in December 2009 with federal funding.