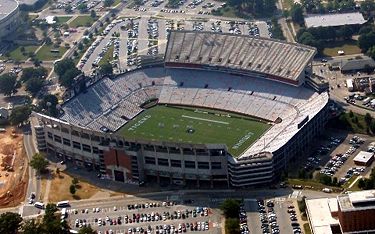 Jordan-Hare Stadium is the playing venue for Auburn University's football team located on campus in Auburn. The stadium is named for Ralph 'Shug' Jordan, the University's winningest football coach, and Cliff Hare, a member of Auburn's first football team and long-term chair of the Auburn Faculty Athletic Committee.

On November 19, 2005, the playing field at the stadium was named Pat Dye Field, honoring former coach Pat Dye. The stadium reached its current seating capacity of 87,451 after a 2004 expansion and is currently the ninth largest on-campus stadium in the NCAA. By the end of the 2006 season 19,308,753 spectators had witnessed football games at Jordan-Hare.

The stadium, then known as Auburn Stadium with 7,290 seats, was designed by Warren, Knight & Davis. It hosted its first game on November 9, 1939, between Auburn High School and Dadeville High School. About one month later, the stadium was formally dedicated and the first college football game was played against the University of Florida on November 30, 1939. By the time the stadium was renamed Cliff Hare Stadium in 1949, it had grown to a capacity of 21,500.

Shug Jordan became head coach of the Tigers in 1951, and he was still coaching when the stadium was renamed to honor him in 1973, making it the first stadium in the United States to be named for an active coach.

In 1998, artist Michael Taylor was commissioned to paint ten large murals on the east-side exterior of the stadium. The paintings depict the greatest players, teams, and moments from Auburn's football history to that date. [1]