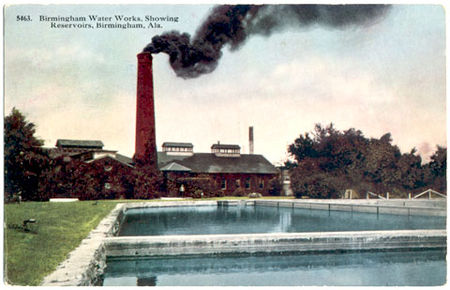 The North Birmingham Water Works was a municipal water works constructed in 1873 on Village Creek by the Birmingham Water Works Company for the newly-established city of Birmingham. It was designed by Elyton Land Company engineer Willis Milner to draw water from the creek by pump to fill a basin located atop "Reservoir Ridge," between 13th and 15th Avenues and 22nd and 23rd Streets. The reservoir ponds supplied the city through underground gravity-fed pipelines. The Birmingham Rolling Mill and the Relay House hotel were two of the few properties to connect to the system as most residents still relied on wells.

In his report on the 1873 cholera epidemic, physician Mortimer Jordan Jr lamented that the new water works, which he described as "most admirable," was not more complete, as the poor quality of wells, located in marshy areas fed by surface drainage, contributed to the spread of disease.

Though the system steadily expanded, its growth was outpaced by the booming development of the "Magic City". By 1884 Village Creek was proving inadequate as a water source because of its limited flow and increasing levels of industrial pollution. The Elyton Company surveyed a canal from the headwaters of Five Mile Creek north of Tarrant to the pumping station. Construction continued for years, hampered by lawsuits from industries along Five Mile Creek. Meanwhile, the pumping station supplemented its reservoirs with water from artesian wells in the area until the canal finally opened in November 1887. 4 million gallons per day flowed alongside the present route of Jefferson Boulevard, which is also called Canal Avenue in Tarrant. New reservoir basins were excavated adjacent to the pump house, and were known locally as "Lake Placid."

This arrangement served all of the city's municipal water supply until a second pumping station was constructed at the Cahaba River in 1890. The North Birmingham station remained in service until 1938, after which it was demolished and its canal filled in.