This article is about the proposed midtown high-rise development. For the senior center in East Lake, see Shepherd Center East. 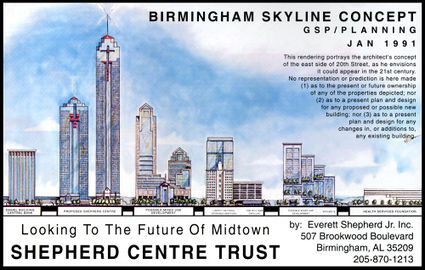 Rendering of the Shepherd Centre proposal

The Birmingham office of Gresham Smith & Partners provided schematic plans and a skyline concept for the project. The two towers were to have been 72 and 44 stories respectively, with signature illuminated crosses marking the upper floors as a symbol of Shepherd's faith.

The project never moved forward, though as late as 1994 a billboard still stood at 21st Street and 2nd Avenue South showing a rendering of the proposed towers sitting on block 121, between there and the corner of 20th Street and 1st Avenue South, adjacent to the Daniel Building.

When the Shepherd Centre was first proposed, Shepherd was in talks with the Alabama Health Services Foundation about making the Kirklin Clinic an anchor tenant, along with State Farm Insurance. The Foundation chose to build a new clinic building closer to UAB, while State Farm constructed a headquarters building in Wildwood near I-65 and Lakeshore Parkway.

The wave of mergers, acquisitions and downsizing that came in the following decade greatly reduced office occupancies in downtown Birmingham. Had the Shepherd Centre been constructed as planned, with more than 2.5 million square feet of leasable office space, the impact on the rest of the market could have been staggering.