From Bhamwiki
(Redirected from U. S. Highway 31)
Jump to: navigation, search

Throughout Alabama, U.S. 31 is paired with unsigned State Highway 3. In downtown Birmingham, the junction with I-20/I-59 serves also as the western terminus of U.S. Highway 280. Before the Interstate era, U.S. 31 was the major north-south highway in Alabama, connecting most of the state's major cities at the time: Decatur, Birmingham, Montgomery, and Mobile. Interstate 65 has supplanted U.S. 31 along this route.

As the United States formed an interstate road system, the Bee Line Highway was defined under the National Auto Trails program. It originated in Nashville, Tennessee and generally followed Highway 31's current route to Montgomery. From Montgomery, the Bee Line continued through Dothan, Tallhassee, and Gainesville to its terminus at Orlando.

After the Federal Aid Highway Act of 1921 was passed, Bee Line Highway was listed first among the 7% of state roads that Alabama asked for matching funds to improve (State Highway Commission of Alabama, 1923). At the time, the control cities along the route included Cullman, Birmingham, Calera, and Clanton. Over time, the Bee Line came to be known separately as Decatur Highway north of Birmingham and Montgomery Highway south of it. Eventually the road was assigned national route number 31. However, south of Montgomery 31 did not follow the old Bee Line Highway route, but instead turned southwest to connect to Mobile, Alabama's only major port. 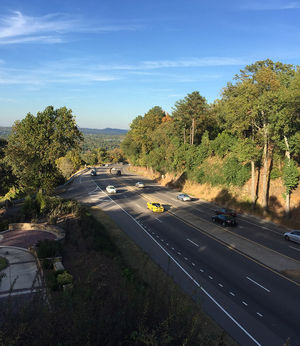 For notable locations on Highway 31 and additional intersections, select the individual road names in this section.

From the north, U.S. Highway 31 enters Blount County to the east of Interstate 65 by crossing the Mulberry Fork. The highway passes through the communities of Bangor and Smoke Rise before merging with I-65 at exit 287.

Highway 31 then splits from I-65 at exit 284, just north of the Jefferson County line. It then enters Warrior where it becomes first Main Street and then Louisa Street before exiting the town. It scrapes I-65 at exit 280 and crosses Locust Fork before entering Kimberly and then Morris. It scrapes I-65 again at exit 275 before passing through Gardendale where its known as Decatur Highway. It then becomes American Veterans Highway as it goes through Fultondale.

Highway 31 has an interchange at I-65 exit 266 just as it enters the Birmingham city limits. In North Birmingham, from 37th Avenue North to Finley Boulevard, U.S. 31 is also 26th Street North, which becomes Carraway Boulevard as it crosses Finley and approaches its interchange with the combined I-20/59 near the BJCC. From that point, the combined Highway 31 and U. S. Highway 280 are elevated through town and are jointly called the Elton B. Stephens Expressway. This portion is popularly called the Red Mountain Expressway as there is a large highway cut through Red Mountain to allow the expressway to continue south into Homewood. The expressway only provides direct access to U.S. Highway 11 (1st Avenue North) from its northbound side. An exit on the expressway between 3rd and 4th Avenues South provides access to U.S. Highway 78.

Just inside the Homewood city limits, Highway 280 splits off to run southeast while Highway 31 continues south. Through the Homewood city limits, from the end of the controlled access expressway to about Shades Crest Road on top of Shades Mountain, U.S. 31 is known as Independence Drive. The road then travels through Vestavia Hills as Montgomery Highway. At I-65 exit 252, Highway 31 crosses under I-65 so that it is west of the interstate. This exit is right along Vestavia's border with Hoover, where the highway is also known as Montgomery Highway. The highway continues south to pass under Interstate 459 at exit 13B.

Highway 31 enters Shelby County and immediately crosses the Cahaba River on Cobb Bridge. It then leaves Hoover and passes through Pelham as Pelham Parkway. At Cahaba Valley Road in Pelham, it is joined by Alabama State Route 119. The combined routes continue south to Alabaster, where 119 turns off onto Montevallo Road. Meanwhile, 31 becomes Alabaster's 1st Street and crosses over I-65 at exit 238 to be briefly back on the east side of the interstate. It continues through the community of Saginaw before crossing I-65 again at exit 231 to be west of the interstate. It then passes through Calera just before entering Chilton County. 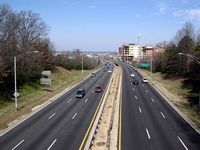 In Birmingham, the original route of U.S. 31 was west of its current location. From the 1950s (or earlier) to the 1970s, it entered downtown from the north on 26th Street as it does now. It then went over two blocks on 8th Avenue North to 24th Street North. The highway then proceeded south on 24th Street to 7th Avenue South, where it went west to 20th Street South. It then proceeded south to where 20th and 21st Street South (now Richard Arrington Jr Boulevard South) merge and cross over Red Mountain. It then continued south on 18th Street South through Homewood, around The Curve to 29th Avenue South and around another curve to what is now called Independence Drive. In the late 1960s, the Red Mountain cut was made to give the highway a straighter and flatter route between Birmingham and Homewood.

The route of 31 has also shifted along the northern slope of Shades Mountain. The older portion still exists as Old Montgomery Highway, branching off of Independence Drive to the east across from Saulter Road. It travels southeast, then turns southwest to cross the current route of 31. It then goes south, crossing Lakeshore Drive and winds up Shades Mountain to the top, rejoining the existing 31.

In what is now Hoover, U.S. 31 once took a less direct route. The "streamlining" and four-laning of the roadway was enabled by a statewide bond issue approved on December 11, 1951.

This route still exists as Lorna Road starting just south of "Green Springs Junction" where I-65 now crosses over 31. It continues south to the east of 31 over I-459 and then curves west, crossing 31 at the Riverchase Galleria. It then winds south, changing names from Lorna Road to Old Montgomery Highway, crossing the Cahaba River and Helena Road just before rejoining 31 at a segment named Pelham Parkway.

U.S. 31 is the parent route of Highway 131, almost entirely in Michigan; Highway 231, which comes within a few miles of connecting Lake Michigan and the Gulf of Mexico; Highway 331, connecting Montgomery, Alabama with Santa Rosa Beach, Florida; and Highway 431, connecting Owensboro, Kentucky and Dothan, Alabama.