From Bhamwiki
(Redirected from Birmingham Age-Herald)
Jump to: navigation, search 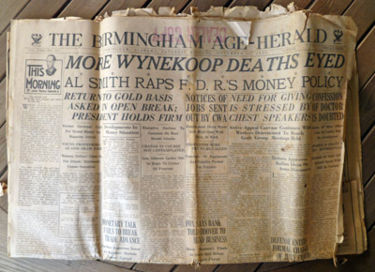 In 1912 the circulation of the Age-Herald was reported as 17,011 daily and 28,475 on Sundays. In 1916 editor C. E. Stanley explained why the paper did not "segregate" news items relating to the city's Black residents, criticizing the practices of the Birmingham News and Birmingham Ledger as, "barbarism," which, "shows nothing wise on the part of the paper, or the one who is responsible for it.". He stated on behalf of his paper that, "We appreciate Negro news, and will run all that's contributed to us by an authorised correspondent, but when we publish it, we do so because its[sic] news and without the remotest idea of placing it off to itself as if afraid it might bite the white news."